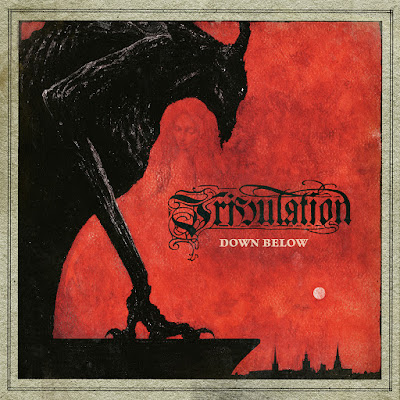 So 3 years after "Children of the Night" the boys from Sweden are back. This album seems like a logical progression with a more stream lined take on death metal. Their new drummer is more of a in the pocket rock guy and doesn't hit you with a ton of double bass so this factors in. There is still a great deal of atmosphere and keyboard parts, that help retain the darker mood. The guitar playing is more thoughtful and nuanced to make up for the fact it might not be as aggressive as their previous releases. The vocals haven't really changed and their mid range snarl is  the most biting part of their sound now as a song like "Nightbound" finds them more metal than say Ghost, but not really what I think of as death metal. They were already out growing and pushing past the boundaries of the genre on the last album I think this album might find them walking totally away from it. In fact it comes up in my iTunes as gothic metal. You still have to give them credit for great song writing and guitar playing. The solos are tasteful and add to the song rather than wank over it.

"Lady Death" is even more straight forward than the first two songs.It's more at the threshold of metal and rock. The raspy vocals are what keeps it anchored in metal. I read an article on Metal Sucks about why there will never be another band as big as Metallica, and it cited harsh vocals as one of the reasons why. It will be interesting to see how this album does as it is their most accessible to date. I don't think it's selling out as it is still true to their sound it just finds the heft dialed back . "Subterranea" keeps up a palm muted tension and has a good sense of dynamics when they bust back . The first hint of something dark and creepy enough to be goth is on the instrumental interlude "Purgatorio". There is more of a big metal punch to "Cries From the Underworld".But much like other songs on this album it owes more to classic metal than death metal. This album has a much more organic production value in terms of  what sounds to be vintage amps that they captured some of this guitar tones with. The vocals are dry and a little too upfront in the mix, but it's not a deal breaker.

There is a more death n roll feel to "Lacrimosa". The vocals do sound a little more like Watain, in the way there are exclaimed. Midway into this song it takes a darker turn. The synths play a much bigger role not only in this song, but the album as a whole. Things get more upbeat and uptempo on "the World". There are interesting layers of guitar and the vocals do sit back a little further in mix on this which works better for me. The actual power chords that set the tone almost sound like 80s Judas Priest, but somehow it all works. They close with the longest song "Here Be Dragons" which at 7 and a half minutes its still pretty compact when you think about how so much metal has gotten to be sprawling 10 minute epics. It moves with a smooth tight chug and then builds from their to a more sweeping build. So this album is not shy on dynamics. I think it's pretty fair to give this album a 9 as I gave "the Children of the Night" a 9.5 and I think that is where this album sits in comparison to it.It might grow on me and change my mind, but this is where it sits with me at present.