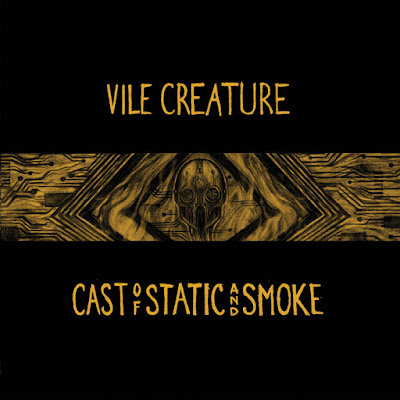 This album is supposed to be a dystopian sci-fi story. The spoken word section that opens the first song pushes this point. It descends into fuzzed out sludge from there. With venomous screamed female growls following the crash of distortion. Midway into this song that lock into a powerfully crusty chug. The vocals double up to create a strong accent. We get both male and female voices calling out from this duo that is creating a hug sound for just two people. Though throughout the album they are joined by a few guests. Chris Colohan of Cursed / Burning Love who lends his voice to the outcry. I like the darker place this song eventually winds around to. At ten minutes the sprawl of the songs makes sense here and is engaging rather than droning.

There is a more lingering build to the brooding beginnings of "Circuits , Bending and Breaking". The anguished screams of KW's vocals lay over the simmering rise of the chord progression. It doesn't lock in as heavily as the first song and lets the atmosphere drone a little more. Rather than lock into one another they hover around each other. James Claypool the guitarist for False/ Deathwish joins in on guitar. While it has a dense pulse the song is not as dynamic as the album's previous offering and hits you as one dense frequency. There are a few chugged accents that break this pulse up. By the end of the song they do lock into more of a riffy groove.

Things slow down for the last song. To the point that the first three minutes drag and drone. I don't think this plays to their strengths. It builds in intensity while staying at the same tempo. it becomes rather plodding even with the spoken interlude. Overall despite the lackluster closing song, the bulk of this album is solid. I'll give it a 7.5. If you want some apocalyptic emotive sludge here is one to check out.