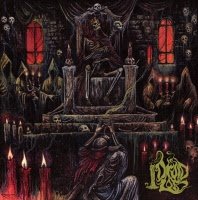 With a name like Druid Lord I was expecting something more touched with folk metal and not such a dominant horror theme. When I first heard this band from Orlando on their Bandcamp page I was not sure what to think of the first song but knew I wanted to hear more from these guys in order to make a conclusive opinion, so I would say the opener was a success as it drew me in with it's brand of death doom. Growled vocals and dirty guitars crawling out of the speakers are really what keeps these guys from just being a doom band. The second song is more of the same but more grinding death metal with the occasional riff owing more to Sabbath than Morbid Angel. These guys rely more of the power of the chug than speed alone. The lyrics are very horror based and growled in a way that you can still decipher them.There is a much more obvious death metal feel to "Evil That Haunts this Ground" that reminds me more of early Sepultura. This also marks the first appearance of synths which are well place for needed atmosphere.It helps further darken things.

The first song that feels more like filler to me and is not as strong is "Black Candle Seance". On it's own two it is not a bad song it just doesn't seem as dynamic and doesn't connect with me. Lyrically there is some similarity to Acid Witch, but I feel that while Acid Witch might not be as heavy writes catchier songs. These guys prefer more glum tempos. On "Creature Feature"The vocals are spit out in a way that does the lyrics favor, as they are a very articulate growl. This song finds them tapping into the same kind of song crafting Acid Witch displays on a more frequent basis. However the lyrics don't feel as focus once they feel at one with the dead, then I am thinking where did this narrative go, but the thick murk of riffing keeps me distracted. They drop down into more of doom gloom on "Murderous Mr. Hyde". This song doesn't hold up as well as "Creature Feature" as it gets a little plodding and the lyrics are very vague.

The leading verse riff to "Last Drop of Blood" is rather cumbersome. The guitar harmonies work, well and if you are really into melodic death metal guitar then I would recommend this album. That only goes so far with me. I can't hear the bass at all. The drummer throws in double bass skillfully but is not really doing anything above and beyond the call of duty for what you expect from any death metal band. I don't want just any death metal band, I want my death metal to vary from what I already have or whats the point?  The song does improve thanks to a killer riff that is just mean as fuck in the last couple of minutes.Overall if you  are into death driven doom or doomy death metal then these guys are going to be up your dark alley. I'll give it an 8 as it works for me the majority of the time, not sure how much mileage I will get out of it , but enjoyed what I heard.