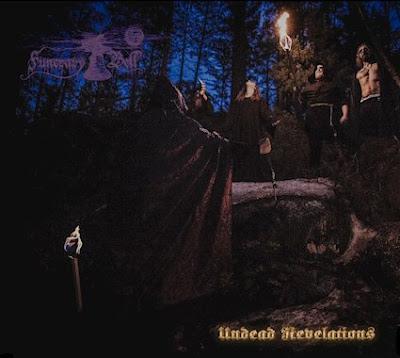 The opening track from this band's forthcoming album, made me stop and ask..."Did these guys always sound like Mercyful Fate?" They don't use the high King Diamond falsettos, but the vocals are in his more crooned moan. This Finnish band doubles them up with some more evil sounding rasp. They take on a more straight forward form of old school thrash at the intersection of death metal with "Goat of Mendes" that follows. This finds the band in the same zip code as Mortuary Drape. They continue to digress into a more conventional form of blasting that conforms with most modern day models of black metal when kicking into "the Word Became Flesh". The vocals have more of a death metal grunt to them. They indulge a darker moodier side that shows more personality two minutes into the song before picking the pace back up. They do slow into more of a thrash gallop. When it comes to guitar solos they follow a more early Slayer blueprint.

"Hermetica" starts off with a catchier riff than what it speeds up into. It has a much more thrash feel, but it's well written, where they fall into the momentum overtaking them when they feel the need for speed. They gallop into "Mantra"  feeling like we have ridden the same horse down this path before. The album does succeed in finding a warm crisp organic sound that recalls 80s thrash, paired with more death metal vocals. They chug into "Revelation Part 2" with a great deal of authority. The vocals dropping into a lower growl that the double bass compliments to make some effective death metal Up to this  point in time are these guys conceding to being solely black metal even earlier in the album when they bombarded the ear drums with blast beats. There is a more melodic bridge that makes the more thrashed out build even more dynamic. They continue down this more death metal direction on "Anima Eterna" .

By the time the album gets to  "Tree On the Planet Grave" they have settled into a blackened death metal with a few touches of melody and dynamics that make this seem marginally more inspired than this being a "Ok, lets make an album so we can go on tour affair". There is a great deal of growth in the production and song writing on this album. You can actually here the bass playing. But five minutes into "Tree On the Planet Grave " it's as inspiring as watching a senior citizen porn where you are only wondering how long can they keep it up. Thankfully they slow things back down when closing with "Spectral Moonchild". They are not able to use restraint for long and find themselves blasting back soon enough. I'll give this album a 7.5 as it got off to a strong start and then descended into something more typical, so after they showed me what they are capable of I expect that level of creativity, you might be happy with this blend of metal that is well preformed if not happy falling in with the current state of metal. For the band's second album this is a pretty decent effort and shows growth putting them a few steps ahead of typical raw Finnish black metal sound.