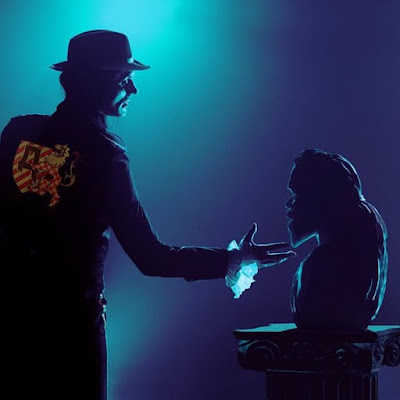 I predicted this band from Sweden was going to break big this year and it makes sense this will be the album to set that in motion. They have been together since 2001, so this is 17 years in the making. The opening track so a little on the happier side than how I normally like my metal in that brand of power metal that descended from Helloween, despite the growled vocals trying to heavy things up. I actually like the AC/DC twang to the second song better as it has a better groove to it. Not sure country and blues influence is something that fans of this band are really expecting so not sure how it will swing with them, but the guitar playing is more nuanced.

There is a more modern metal stomp to "Kings Harvest", oh, yeah all of the songs are named something about this king. The vocals are more death metal grunted on this one. The drummer kind dials it in to me and just gets the job done and the guitars do most of the heavy lifting. The vocals have a wide range of different flavors , but most fit inside the box of hard rock. The are typically layered and ride the grooves. In the last two minutes of this song they do get into some some darker sections. "A Statue of the King" starts off like "22 Acacia Ave". It does get weirder and offer more of what I consider this band's own personality. "King After King" is less impressive and is middle of the road power metal.

The album closes with  an instrumental of the more  standard power metal fare. It is well done and has a modern groove to it that doesn't make it sound like they are just ripping Helloween off. Though after mentioning them twice in this review it makes me want to download "Keeper of the Seven Keys". This is a pretty decent album that might be a shade happier than what i normally listen to so if you are a fan of these guys then it's what you dig, so you are going to dig this. Not to say this album is not without it's meh moments. It seems like a bunch of albums are getting this , but I am going to give this one an 8.5 and see how it grows on me over the course of the year.