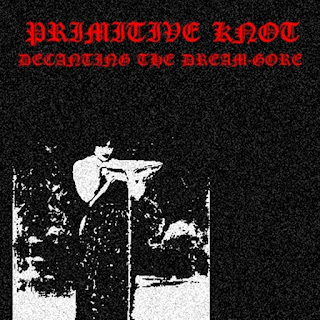 My friends at Cvlt Nation were raving about these guys so I had to check it out. This British band is on a more experimental underground edge of post-punk. It opens with a ambient passage that is not quite a song. When they get more into the meat of the matter it sounds like a really low fi version of Killing Joke. The pitter patter of the double bass is kinda sad , but I can hear where they are trying to go. I hope they get there and are not content staying in this place production wise. I understand money is an issue for bands. The struggle is real. But in this case there is more intention than execution due to this. There is a more of punk feel to "Into the Forest of Knives" . The vocals sit further back in the mix on this one. More industrial soundscapes clash against the song's driving charge.

They take on more of a black metal feel, but with distant Death In June like vocals. Then we are back into the more punk place. There are some effects on the vocals and they sound much better this way. "Seven Thousand Crystal Frames" reminds me of Darkthrone's more black n roll moments. Then there is more of an industrial chant to "Howl of Rebirth" that really suffers from piss poor production as the drums sound paper thin, when they need to be bull-dozing you, go ask Godflesh how this works. One again I think there is potential, but this needed to be recorded in a proper studio, if it was then they need their money back.
The last track is just ambient noise. The production is really a sticking point here as it effects the overall execution of these songs. Things that could be powerful with more bass behind them fall flat and all the volume won't counter balance it. If you are really into underground punk then you have acquired a taste for things that sound like shit. It's like e you have a magical magnifying ear that can make a demo sound like "Reign in Blood" . I lack this having grown up in the 80s with everything over produced. So I am giving it a 7.5, it is being rounded up due to it's potential.