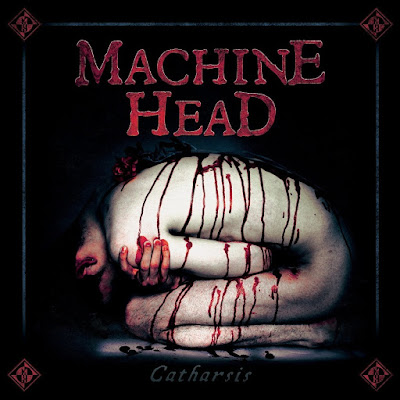 While they are not letting freedom ring with a shot gun blast, the first song is aggressive enough to almost work though on the second listen it seemed like they were angry in the same way Slipknot is angry. If you think that is a good thing then we are going to have differing views on what we want out of this album. There is a more melodic touch to the title track that follows. Where I liked the opener less the second listen, I like this song more. The nu-metal is still being kept live on "Beyond the Pale". The more shouted tough guy vocals don't work as well for me. If he was going at it as rough as he did on the first album then I might be alright with it. Its the way the vocal phrasing accents some of the punches that really reminds me of Slipknot again.

The Slipknot touches to "California Bleeding" actually work, though the song benefits from having really good lyrics. That goes a long way with me. The rapping on "Triple Beam" sounds like it's from a time warp into the late 90s. Though if you are fine with it taking you back to that drugged out place in time, then it does have some value. Though it talks about meth, when the rap use of the phrase is talking about weighing out coke. So I guess pick your poison. Drugs do seem to be the prevailing theme of this album. "Kaleidoscope" is a little too early 2000s in the way it tries to blend a more Drowning Pool like vocal. It finds them losing their personality as this could be any metal band from 1999.

Not as a big of a sound as what I have heard from previous albums. I am unsure of the acoustic strum on "Bastards".  "the Blackening" was the last thing I heard from Robb Flynn. He is the only original member left and since this is his baby I guess that doesn't matter. He was social justice warrior number one going after Phil Anselmo on Youtube and the sentiment is celebrated on "Bastards". "Hope Begets Hope" is the first song where the big guitar sound I remember these guys having is invoked. The verses do have a more melodic radio rock feel. This song is better than many on this album, but doesn't sink the hook in you as hard as I might like . At 50 it does feel Flynn is more current than many who found themselves in a mid-life metal crisis.

By the time we get to "Screaming at the Sun" I have accepted the fact this is a nu-metal band and I am reviewing an album by a nu-metal band. So based on those facts they are successful at creating that sound. "Behind the Mask" must refer to the masks Slipknot wears. It is more of a ballad like interlude than an actual song with its own two legs. "Heavy Lies the Crown" feels more like an over dramatic Alice Cooper song with the whispered vocals. The verse riff has a more classic metal chug to it. So just because I accepted the fact this is nu-metal it doesn't mean I am accepting something like the song "Psychotic which would have come across as filler on a Mudvayne album. "Grind You Down" has a little more momentum which helps it. "Razorblade Smile" is not as fortunate as it feels more rushed to me.

The album closes with "Eulogy" which is a very atmospheric ballad. The vocals are shrouded in effects. It manages to build without feeling like it goes anywhere.I'll give this album 6.5, there were only two songs that did much for me. These guys know what they are doing I would expect something a little more mature from a 50 year old rather than teenage temper tantrums, that brand of angst could be more refined. If you are into nu-metal then round it up a whole point.