A Pregnant Light : "Lucky All My Life" 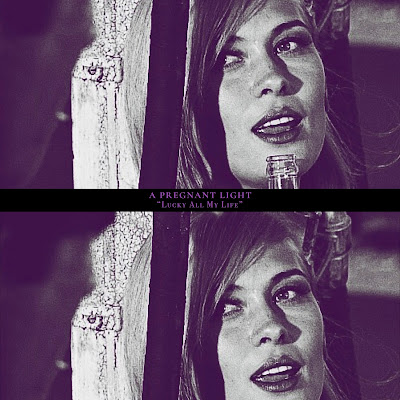 The more often black metal than not project from Damian Master is back with another EP. This is the most straight forward, the first song there is more of a blackened touch to it and that carries to a lesser extent into the second song, mainly due to the vocals that sit back more distantly in the mix. "One Thing, No Thing, Everything" just has more interesting guitar passages. The guitar playing is more complex and technically matured, considering this is the 12th of this projects eps and albums it should be.Things do gradually begin to become more melodic with "Iridescent Peppermint" really crossing over into more of a rock sound until it blasts off.Then there is almost a more Converge like feel to it, if we are talking about the band's less spastic punk rock moments.  The vocals on this album are all working off the same emotionally color and stay in the same mid range throat retching.

There is a darker hardcore sound to "Say My Name" that balances drive and melody, though resorting to blast beats midway into things. There is a hint of depressive black metal in the emotions behind the churn of this song.  I like the song title "Purple is the Color of My True Love's Bruise" that is a lot for the music to live up to. This album is much less experimental than what we have heard in the past from Master's , but the song starts off with a little more of a shoe gaze drone. Then it locks into a more grounded chug. It slows back down after blasting off into a more atmospheric breakdown. This gives the song room to breath as it still pulses on and doesn't lose it's build in the dynamic shift. This makes the blasting to come more worthwhile. It's like I always say how can you appreciate what fast sounds like if you haven't heard slow? The vocals take on a more hard core cadence when it comes out of the blast.

This might be a more straight forward effort , but it is also more song focused which I can appreciate as that shows maturity on the part of Masters. I'll round this up to a 9 and see how it sits with me. If you are a fan of this project it might take a little getting use to be if you like the more metal side of Masters then this will be a welcomed step on the gas.