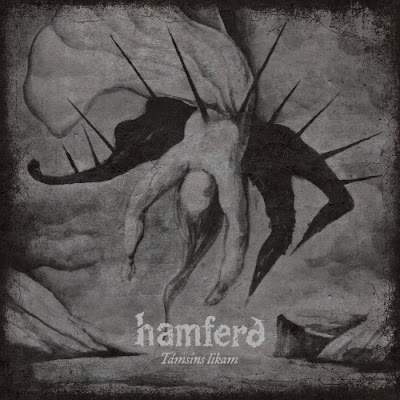 I typically find myself at odds with the musical tastes of Metal Sucks, but they told me this was the darkest album that came out this week so I was willing to give this band from the Faroe Islands a shot.They are a doom band , who trade of well sung mournful clean vocals growled vocals . They are very successful at creating a mood. By the 2nd song "Stygd' I am sure these guys are skilled at what they do. The blend chants with low gurgled growl. Metal Sucks was right as this is dark and sonic in the way it creeps up on you. When they are in their heavier moments is reminds me a little of Esoteric without the shredding. The production on this album is really stunning and the mix is great. You can hear every instrument, which with doom can be tricky as things can become to over driven and turn into a low end frequency. Think the vocals are well balanced not too much clean singing not too much growling.

The guitars create a beautiful forest of creepy melodic shadows that enfold in their ominous crunch on "Tvistevndur Meldur". This is not as romantic or goth in it's intent as My Dying Bride, but at times touches on similar places. Their native tongue works beautifully, I don't think I would want to hear these songs in English. If this was funeral doom the songs would be double the length, so what these do is fairly concise in comparison. The vocals take on more of a soft tone going into "Frosthvarv". This comes across as almost a more delicate Katatonia. The jump off from the previous song with more of a soaring melodic nature that turns mean into more of a chug with "Hon Syndrast". This feels more death metal than doom, though the lines blur some. Not the best song on the album, but that still puts at better than most. Not sure the sped up black metal moment works, but most of the song does.

The last song is the longest at almost 11 minutes. They hesitate too much to go into the actual song. Four minutes of build up that could have been trimmed off and almost five minutes until it gets into the kind of heaviness they are good at. So its ends on not as strong  of a note. Regardless  I like what they do ,  I am unsure if doom of this pacing is something I would really wear out on my iPod, but this is an album I left on and let play as I was writing this evening, so far that it earns a 9.