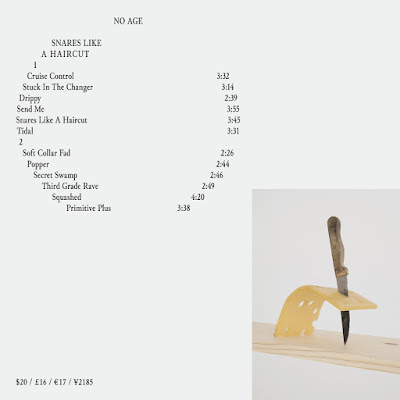 The 5th album from this Los Angeles duo catch you up in a dreamier swirl super imposed over there take on punk rock. The vocal have a detached yet charismatic baritone that is marginally more upbeat than say Joey Ramone. As far as the song itself goes , it took a few listens to absorb. This applies to the album as a whole, but from the jump it's catchy enough to keep my attention . Most of the songs on this album are around three and a half minutes long so even when they are weaving a more dreamy form of indie rock still stick to a punk formula. I can hear Sonic Youth influence in the guitar on "Stuck in the Changer". This song has some interesting texture, but is not as urgent as the opener. The guitars on "Drippy" drip with delay until the drums come in prompting them to step on a more distorted tone. There are some provocative layers of atmosphere draped over otherwise simple punky pop songs. It's when they keep this brisk and balanced that the over all sound works the best.

This Sonic Youth like blend of ambiance mixed in with the jangling guitars continues to work really well on the infectious "Send Me". They take simple sounds and really craft them together into something unique. The title track indulges in the ambient noise perhaps a little too much by creating an instrumental of sorts that is really more of an interlude.They kick into a more up beat drive for "Tidal". The vocals are really well produced, though the guitar sits oddly in the mix at times. There is odd noise flickering off of " Soft Collar Fad". It seems more to be for the sake of noise rather than something that really benefits the song. The over drive gives way to something that reminds me of 90s Alt-pop on "Popper". The vocals come across as being more disenfranchised, but the guitar compensates for it .  The rowdy jangle of "Secret Swamp" certainly reminds me of 90's indie rock. There is a weird transition into the chorus that jumps out even with the slack glaze.

Like the title track "Third Grade Rave " is another noisy interlude that could have been left off the album with little impact. There is a more lo-fi and minimal feel to "Squashed" that feels less organic than the other fully formed ideas of songs. The music meanders around the distant vocals. The vocals start off in the background of "Primitive Plus". The song builds into more of a shoe gaze shimmer. Overall I think this album is a good compromise I'll give this album a 9.This comes out January 26th on Drag City.