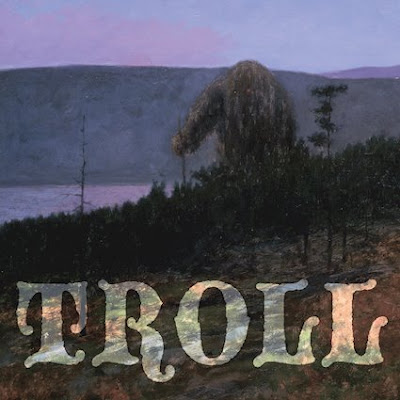 The good thing about this band out of Portland is they have some atmosphere and layers to what could otherwise be a more straight forward vest metal. Taking notes from Pallbearer seems to have become the trend in doom. The have lightly crooned floating over the 70s jams.There is more Sabbath worship going on here than what you hear coming from Pallbearer, so that sets them apart. The are also more straight forward metal. Their press release tries to compare their singer to early Sabbath Ozzy and I don't hear it. He doesn't belt it out with the crazed desperation that Ozzy did and lacks the power. His voices is more of texture, there is a word growled hear and there , but his voice has a drugged creepiness to it. The band gets credit for now dragging their songs out into sprawling epics and keeps them concise with the longest hitting the eight and a half minute mark. "the Witch" lumbers somewhere between stoner and doom. The drummer plays around the guitar riff rather than hitting it head on. The mood is more scattered and the vocals don't connect as well with me as they did on the first song.

They play to their strengths more on "An Eternal Haunting". This means less vocals and letting the guitar claim the spot light. The guitars do some pretty interesting things here. I do like the fact the vocals have effects on them and I think they need to go more in that direction.The drummer also steps up his game on this one and makes it my favorite song on here so far.It's jammy and sometimes blues tinged.The vocals come across as being more ethereal, which is smart as this guys is not a metal singer. Sometimes he reminds me more of Andrew Wood from Motherlovebone. This comparison is given even more merit on "Infinite Death". I think this guy could be a decent singer, I think he has an original approach to what he is doing. Sometimes he is not sure about his lower notes and they are out of key. Musically it plays it pretty safe in a Sabbath boogie.

"Savage Thunder" rumbles along the road of more typical doom. The singer goes into his upper register and show a little more balls which is an improvement. I'll give this album an 8, I think these guys have a ton of potential. The vocals could stand to be smoothed out in places and they could play it a little less safe and veer more from the tried and true Sabbath worship and get into the more textured guitar parts where the band shines.