My Silent Wake :"There Was Death" 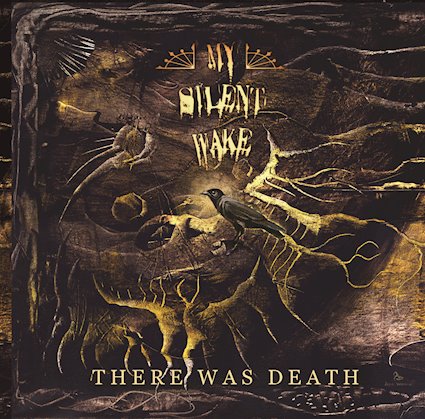 This album from the British band doesn't come out until February, but regular readers here will know that February is Black Metal History Month, so I am going ahead and getting all the metal that is not black hearted out of the way so I can focus on all the albums I am stock piling for Black Metal History Month. These guys are doom with death metal vocals. The guitar offer up plenty of crunch and melody. This might make you question where death metal begins and doom ends. I think mood is most important here. Is the aggression the dominant force or is the dreary nature of doom? On the first song doom is. Though they could dial up the double bass and change my mind at any moment. The song does build in intensity, though the double bass is more of a the undercurrent. By the second time they are getting more aggressive, but more along the lines of Slayer's serial killer love songs. "Killing Flaw" finds the band pushing more towards death metal, yet they show enough restraint to keep the bpms down.

They back off into a more delicate melodic approach that has way more feeling to it on "Ghosts of Parlous Lives". The vocals stay in their death zone, but the guitars get more sorrowful and take the rest of the band in a more doomy direction. Sung vocals are layered over the growls heading  three minutes into the song. This is the first of the album's two ten minute songs. The title track has a more elegant almost folk metal swing to it.This gives the song more of a Moonsorrow feel. The pace picks up as the gallop toward the end. They gallop even harder into "Walls Within Walls". Which lyrically is awkward, maybe it's talking about racism, but the lyrics don't work even if the polluted skies line suggests it might just be about world views as a whole it breaks the over all theme of the album.

They slow things back down for "No End to Sorrow" this is a wise move as the more upbeat galloping stuff was beginning to run together and they seem to invoke more feeling in the more doom like mode. The album closes with the ten and a half minute "An End to Suffering". At three minutes in what is a very delicate atmospheric guitar centered instrumental gets growled over. A minute and a half later it is starting to drone and I begin to wonder how they are going to drag it out for six more minutes. Sung vocals are another layer added. This begins to build in a manner similar to what Mournful Congregation does however they are more powerful sonically.I'll give this album an 8 it could be darker and heavier in an emotional sense, but it's still pretty solid.