Harakiri For the Sky : "Arson" 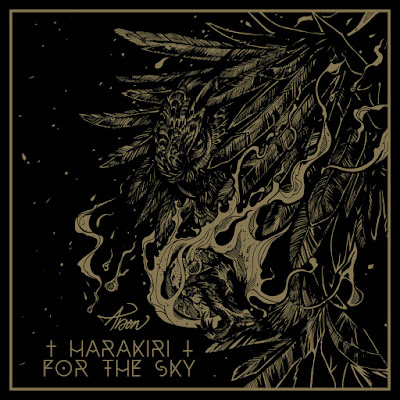 In my musical forecast for 2018, which can be found here...http://abysmalhymns.blogspot.com/2018/01/the-forecast-for-music-in-2018.html , I did forecast that post-black metal would be going the way of the dinosaur. That doesn't mean those bands are going to pack it up and go home, most will take a path similar to this band from Austria, leaving the atmospheric trappings at the door and going for a more in your face black metal attack. The problem with this is it is not being done in the most original fashion. These guys don't suck at it in fact the album sounds good and there are interesting or at least head bobbing moments in some of the grooves. On the second song they slow down and give a more dramatic punch with one guitar playing a melody that recalls some of their more post rock moments this time set against a more muscular background. This however has more in common with a band like Vreid than Deafheaven. I like this song more than the opener. The vocals are in a mid-range choked yell and they chug along pretty well maintaining the momentum even with increased melody.

"You Are the Scars" find the guitar melodies are almost going into a more elegant folk metal direction. The vocals follow a more typical pattern for harsh "singing". The drumming is very nuanced, the overall musical direction is not really reinventing the wheel here. The song defaults to blast beats  when they are not galloping along on a twin guitar harmony. Nothing about "Heroin Waltz" brings heroin to mind in terms of the picture this song paints. It is a more deliberate and less pagan metal variation of a theme established in the previous song. The riff to "Tomb Omina" is more sonic and the vocals are shouted in a coarse more hardcore manner. The guitar harmonies still have a folk metal feel to them.

The first real signs of some post-black metal gaze whatever is on "Stillborn" that balances the sonic sweeping melody with metal authority. If you are into guitar solos , this song has a good one. It goes into an almost proggy section that is very melodic. It might be the monotone roar of the vocals , but the songs begin to run together at this point ""Voidgazer" is very melodic and has some catchy riffs, but If feel like this album is one cruise control with middle of the road metal. That not only sums up the song , but the album as a whole, it does sound great with catchy guitar holding the songs together with a drummer who gets the job done, so I will give it an 8.