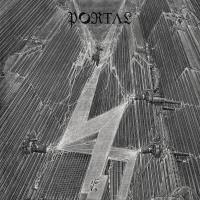 Things are getting weird. This is my first time sitting down and giving a solid listen to one of the albums from this Australian project albums. I have heard lots of good things, and caught a song here and there, but never immersed my self in them. I just listened to the new Tribulation, which crossed from death metal into a more accessible sound. These guys have said fuck accessible we are going straight for crazy as god damn hell.It opens with noise and then bursts into noisy discordant chaos that can be linked to the DNA of death metal. The mix keeps this from soundings as dense as most death metal is. They are technical and precise while being all over the place. If you though Deathspell Omega gets nuts well these guys are further out into the mouth of madness.

It sounds like the vocal where recorded backwards. It sounds like breath is being sucked back in rather than forcibly expelled. Vocally this makes for less powerful growls and more of a breathy mutter. I find myself asking if this music is meant to be engaged or endured. The musical quality begins to get obscured on "Husk". Big on blast beats that are whipped out in a spastic manner. By the time we get to "Phreqs" things are beginning to run together and sound similar. I am also less impressed by the acrobatics and waiting for more song development. Noise is a big part of what they do, it takes up the first minute of the blast fest that is "Crone". I can still appreciate the extreme nature of what they do, I need more dynamics. The expand and retract of this bands revolves around noise. I like the chant of "pray for sickness" , but I need a little more than that to hook me in. I had to give "Revault of Volts" a second listen, because it went by in a blur. Only marginally more impressed by the song than the blur.

"Spores" finds the band continuing to grow more abrasive and noise ridden. "Phantom" finds them blasting even faster than before. When it comes to the closing song "Olde Guarde" I wonder who they can keep this up for ten minutes. Songs at this speed tend to be shorter since you have already raced to the finish line. They slow a little the three minute mark, but the guitars keep buzzing like a hornets nest.Then it delves down into a darker and more minimal passage that sounds like a guitar being played while someone drowns. I'll give this album a 6, I respect what they are doing it's just not something I need to listen to more than once. If you like both noise and death metal in a blender then this is more your speed.This is being released on Profound Lore