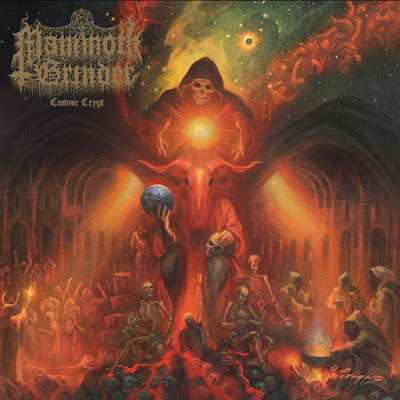 In music journalism there seems to be two schools of thought either paint the band into the picture of who you want your audience to be or if you are really into kissing a record label or P/R companies ass, paint them into being who they want them to be. I try not to play into either school and try to just call a spade a spade . It's what I used to like about rap from the 80s or 90s they had a quality control and used to call out rapper who were whack, These days that only happens in the comment section of music blogs and tend to devolve into trolling with not reference point or fact. I can say this band is not whack as they are good at what they do , however what they do is very easy to define. I think i'ts pretty easy, to say without question these guys are death metal. Upon second listen I think these guys benefit from the fact that they come in so heavy it makes it sound like there is more of an original flavor than might really be there, however The  execution of the second is more convincing. They tend to steer closer to the tried and true formula for death metal the rest of the way to the point that it's not until the fourth song "Divine Loss" that I am able to hear a clear cut distinction between songs. There is a little more of a punk undercurrent to that one. I think one of the albums more redeeming aspects is the fact these songs are very condensed. The longest song is still under 4 minutes so they never wear you out in one song with too much of the same thing.

Many of the guitar solos recall early Slayer and Morbid Angel, lots of diving off of the whammy bar.The drumming is a little less nuanced than what I want from death metal that I find exceptional. There is less double bass, making me think this guys used to be in a punk band. "Superior Firepower" is so straight forward that it begins to bore me a minute into it. The punk element to the drumming starts to get on my nerves as it does the stiff pitter patter on the snare that makes me think of those monkey toys with the cymbals. "Human is Obsolete" doesn't do anything to change my opinion and "Locusts Nest" really only seems to be a faster paced version of the previous song. "Mysticism" is the first song that really begins to change my mind I think I like the fact the dense dark riff reminds me of the first Unleashed album. They slightly revert back to their old ways by going into the monkey cymbal beat here and there, but I can handle it better when it's book ended by something more interesting."Rotting Robes" has a moshier riff to it that I could have found my self wanting to jump into the pit as a teenager so I gotta give them props for that one as the title track that closes the album is much less memorable.

Are these guys good at what they do? Yes. Do they have some cool riffs here and there ? Yes. Do you think I am someone who is content with cool riffs here and there? No. Do I need a greater sense of dynamics and some atmosphere to convince me things are darker? Yes. Do I already own all of the death metal albums from the 80s where this was done ? Yes.  So given these facts I am giving this album a 6. If you would have answered them differently or are too young to remember when this type of music came out then it might be more impressive and you might want to round it up higher.