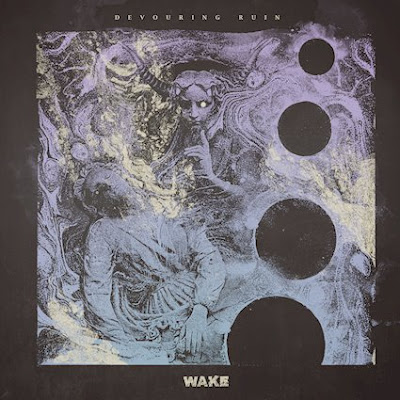 On first listen to the opening track you might think this  Canadian band stomps out some crusty yet melodic sludge. The vocals are guttural and growled with a great deal of conviction. Then the death metal influence that appears on the second song sticks and stays. You can hear traces of their more grind core past.,midway into the song the chaos becomes more pronounced. Obviously saying the drummer is a monster would be stating what is expected when it comes to this kind of music. The guitar are more interesting as this is way more texture finding them maturing out of being brutal for the sake of sonic brutality.  By the time we get to "This Abyssal Plain" they are throwing the melodic headway they made on the first song out the window. There are breaks of weirdness and things do slow down into the kind of pounding I am more about. This is not the album's only weird noisy moment.

There are tormented layers to the anger being expressed here, so it has more depth than just in your face death metal aggression.  Yet when it comes to the actual notes being played they come across as a more sonically throbbing take on death metal. Fans of Ulcerate should 100 percent be down for this album. They even pull out some jaw dropping guitar solos.This is the first thing that reminds me that Ben from Khemmis plays on this album. They throw in a great deal of dissonance and slap it against often sharply angular riffs. When they do speed up into a blazing fury on "Torchbearer" it's fine because they have already been doing other forms of heavy. "In the Lair of the Rat Kings" is not as dynamic. It is very heavy, but some what one dimensional, though driven by a cool riff. The rule around here however is cool riffs alone does not a good song make. The vocals get a little monotonous by the point in the album.

"Monuments to Impiety" hammers at you like a post- Dave Vincent steam roller of a Morbid Angel song.  They end with more of this death metal tone . It's stompy in some places, but barrels pas you with a great deal of double bass. These guys are good at what they do. While I have enjoyed the listens already derived from this album it's not something I can see myself listening to on a regular basis, but I will give this album an 8.Comes out this Month on Translation Lost Records.