Spotlights : " We are All Atomic" 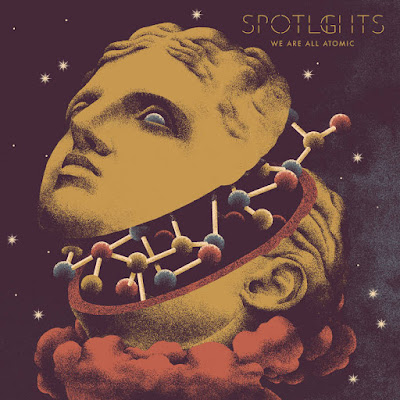 The New York shoe gazers are back with their shadowy take on the genre. There is solid blend of shadowy mood that creeps up through the atmosphere on the opening song. I like how percussive the bass is and mixed into the drums. The vocals are the typically hushed drug lullaby that is typical for the genre. There guitar tones are all masterfully recorded . It sounds pretty fucking gorgeous. I know the headphones I have on lean towards a more bass driven mix, so this is going to be an album you need head phone for rather than trusting your computer speakers. The crunch down and get heavier with the more sludge influence sound that colored the previous album. This is also complimented by a more shouted vocal. That is not to say they are done with more melodic and subdued vocal. It's a great balance of dynamics.

For the records none of the songs have titles , they are only listed as parts. You might as well see this album as one work, almost like a symphony as it is a movement. This can be frustrating if you want them to come with the songs like they did on "Love & Decay" They have a fresh new sound, but recycle it some on the second song which sounds almost like a continuation of the first song. It still sounds great , but is a little redundant from a song writing perspective. The third part is under five minutes and works of tension. It sounds good , not unlike the rest of the album , but the first half of the song still finds you hanging on what is little more than a jammed out intro . In the last minute a more upbeat riff comes in to give it some drive, but it's all build no pay off until the next song.

Maybe this is intentional . If that is the case it's kinda pretentious as that is not how rock music should be ingested . They build off of the third song in the last song of the album. It's almost kind of Tool like in how the groove is to coiled and allowed to the explode. I can hear some Failure in this as well. It is a good thing this song really pays off what they were building so it kinda hard to get mad at them for getting proggy with this concept. There is a dynamic ebb and flow to this song ,which is allow to expand retract. I do not like this as much as " Love & Decay" , but it sounds great as for the most part is really well done, despite the issue I previously state which will not keep me from giving this album a 9.