Ulcerate : "Stare Into Death and Be Still" 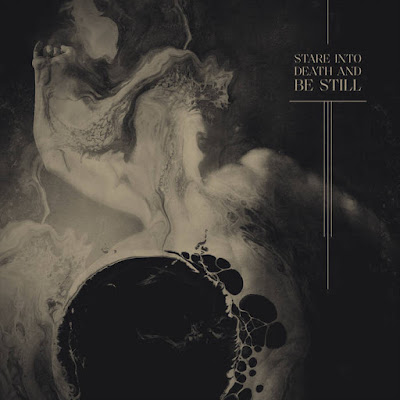 The New Zealand death metal band's 6th album really finds them making the most of what works best . They have their sound dialed in. It has enough different elements to please most fans of death metal. They are atmospheric without having to relent on the heaviness. They are dissonant without forsaking melody. The have a low classic death metal growl that digs into the darkness of a subterranean depth. The have a punishing enough assaults' coming from the drums to please those who look for brutality when it comes to their death metal. That is if they are not wanting something to slam them in the face like Suffocation does. There are blast beats , but this does not owe anything to black metal. To just be a death metal band in 2020 says something about the dedication to ones craft , as doom and black metal influences have run rampant on the genre since the last album these guys released.

These guys are not what I think of as technical death metal, though their compositions are intricate. "Exhale the Ash" finds them weaving some melody into the angular jerk back into the faster sections. There is a certain uniformity to their sound that carries over from the first song. At a minute and a half into the song they give it the breathing room it needs for it to stand on it's own two legs. Death metal drummers have to be good, so it's expected, but this album once again finds their drummer going beyond the call of duty. There is a little bit of swing to the title track. It is not just a full frontal ponding which is a wise choice as it was already beginning to numb me out and we are only on the third song. This reprieve only last for the first two minutes then they pummel you for three minutes before you get anohter breather . They do make the second half of the song more interesting. " There is No Horizon" gives a better picture of how their songwriting has matured. Only three of the 8 songs find them passing the 8 minute mark. So they do not get over indulgent and jam things out. In fact I have not heard an actual guitar solo yet. If there was one it got buried in the barrage.

Up until the vocals come in they use restraint on "Inversion". After that it's back to heavy as normal. Dynamically this album could use more moments like the beginning of "Visceral Ends". I am surprised they held back as long as they did to crunch down. There is a simple palm muted chug that runs through the middle of the song that proves less can be more. The beating they give you the first 3 minutes of "Drawn into the Next Void" doesn't feel as fresh as the atmospheric section that follows it. By the last song things have kind of blended into a blur of distortion and double bass with some angular melody rining out over it. I will give this album an 8, mainly because the songs can become a blur and uiniform in sound. It is not their best album, but they have grown as a band into a very concise machine. Fans of this band should not be disappointed. This album is being released April 24th on Debemur Morti .