Aeonian Sorrow : "A Life Without" 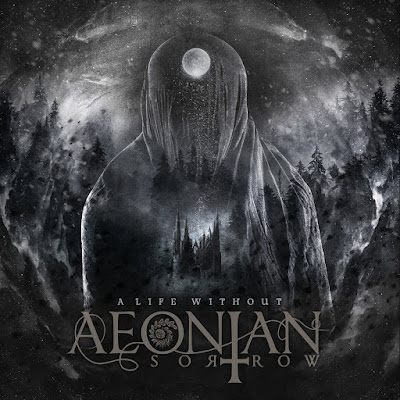 Here is my first stab at these guys . Half of the band is from Greece the other half from Finland, so there is a European influence , I guess more colored by the Finnish side considering the more goth tinged metal that come from that region. The low growl on the first song gets credit as it sounds like something you would find on a gore grid album not a doom band like this .  Once they all begin to kick in things build up from the more minimal ambiance the song started with and the vocals are no longer the only thing keeping them heavy. There are some interesting production choices in terms of the mix. The vocals were a little dry and the keyboard almost to reverbed. Midway through the female vocals come in , but in more of a backing capacity. I can hear My Dying Bride is an influence and I am fine with that. They are also into death metal judging by how fluid the double bass is . When Her voice makes itself more prominent in the song, they shine. She is a better singer than this guy is a growler.

They are heavier at the onset of "One Love" . There is a denser punch to the guitars . At ten minutes I feel it's reasonably paced for doom. Sure longer than your average song , but the are playing much slower. Gogo's voice returns to give things more of a Gathering like touch. If you took Katatonia and combined them with say Nightwish, the results would be similar to "My Solitude" and that is a good thing. This is for sure the direction they need to go in it's the kind of killer song I would wear out if this whole album was like this . They prove they can write a strong songs and she can make magic with her melodies .  I get they like being heavy. I can respect that . But if you can do what they did hear , then that is what you need to do .


The last song starts of in a very similar direction that the album opened with .  The difference being it's her vocals rather than the growler. Smart move.  I would not say they are a funeral doom band , they are a gothic doom band influenced by funeral doom. Perhaps they were at one time, but I think that sub-genre would be confining and find them not playing into the strengths they have clearly grown into. The growls do return and they fit better when the roles are reversed and she is in the drivers seat with the growls backing here. She is the best female metal singer you have not heard yet. She can belt from a husky alto. I want to go back and check out the album before this as I am impressed. I will give this a 9.5, they have a great deal of promise as she is an amazing talent and looking forward to hearing how they grow from here .