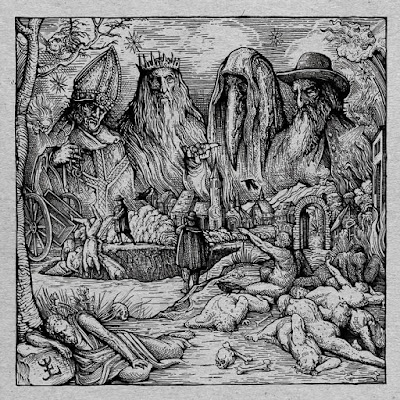 Here is a Polish stoner metal band that has a great deal of heft to there sound and sonic layers. I like that there is some creepy melody to this , but it's hard to ignore the fact that this sounds a lot like Electric Wizard meets Uncle Acid and the Deadbeats. This is kind of a problem with the sub genre of stoner metal, but I think asking for some originality is not a great deal to ask for. It's not until the second song that you really hear more of who they are . The vocals take on more of a growl to get rid of the acid drenched Sabbath worship that descended from other bands first. It pounds ahead with a little bit of a bounce in it's step, but jams more than it really weaves it's way as a song. The synth sound midway into the song helps give another color to the proceedings.

"Heathen" has a stronger vocal melody to it's chorus than the first two songs. This goes a long way with me and less judging of the droning riff they jam over. I am easier to please than it might sound most of the time if you are regular reader. They use the ten minutes of "Doom Bastards" wisely by backing off and allowing room to breath in order to give the album more of a dynamic range. If they had continued to rumble at you, while they are good at that , the results would have created something that had all begun to sound the same. The less fuzzed out guitar tones might head in a more "Planet Caravan" direction, but this is ok in the context it is being done here. By the time we got to "World Beneath Us" the album began to fade in the back ground. I took a break from it and came back to it with a fresh set of ears. It has more of a classic doom sound. The vocals are the more mock Ozzy style. There are some interesting sounds here, but nothing that makes this stand out from a song writing perspective.

There is more of a Motorhead like bombast to the last song. The vocals are more snarled. It seems an odd touch to have a fast little punk rock ditty that clocks in at a minute and a half close out the album. It's like "Oh yeah , by the way we also like Venom" .  Over all this is a great album. It's dark , heavy and melodic. By heavy not just heavy in a metal sense , but sonically intense as well. One of the best stoner metal albums I have checked out so far this year. I will give it a 9.