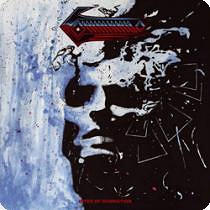 I had high hopes for this Swedish band when they surface in my in-box. Right from there was a riff that almost rips off Mercyful Fate. The thing that was the biggest disappointment was the vocals . The are crazed , but also a little pitchy. I was hoping for something more sung. Musically these guys are pretty decent. Mercyful Fate is one of my favorite bands , as is In Solitude who drew heavily from Fate and I still loved them as they brought their own darkness to things. The drums are weird sounding going into the second song. There are a few production mishaps , but early thrash was not the best produced by any means. It's on the second song that I pick out the vocals remind me of Paul Baloff . By the second song either I am now used to this vocal style or it works better with what they are doing. This is less Fate and more like Maiden's thrashier moments.

By the time we are at the third song what they do begins to need more dynamics as it all starts sounding the same. The pacing is becoming very similar . While the vocals grew on me by the second song I am already tired of them one song later. Lyrically it's a bunch of wanna be fantasy occult gibberish. The fourth song is an instrumental, that is basically a cool riff that could have been better served as an actual song. If the purpose was to spare us from the vocals then I guess that works as it's more of the same on "Sinners Soul" in places you can hear more of a "Kill'em All" Metallica thing going on. The melodic break in this song is what they should have been doing all along to keep things fresh.

"Burn the Sky" doesn't offer much different except for the fact it's more aggressive making it sound more like something from 'Bonded By Blood" .  If you are really into Mercyful Fate, Metallica and Exodus and your tastes do not vary from 1986, then this might be the album you are looking for. If this is the case you might have felt albums like "Don't Break the Oath", " Ride the Lightning" and "Pleasures of the Flesh" were over produced sell outs rather than classics that outshone what came before them. They are good at what they do , though the vocals need work. Will give this a 7. Being released on High Roller Records.