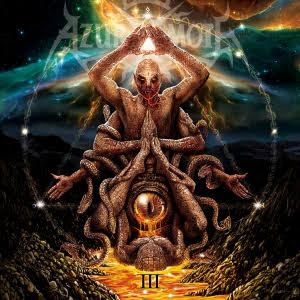 These guys are a weird progressive black metal project. With members of Monstrosity and Rumpelstiltskin Grinder creating the chaos here. It's a very melodic chaos. Almost a symphonic chaos. The first song has more melodic vocals then on the second song the harsher vocals are more dominant, though things like violin soften it a bit and add textures. There are some pretty impressive exchanges between the keyboards, guitars and violin. Shreddy but in a more musical context than just the more wanky brand of prog. Sigh would be a fair comparison. They drift into interludes that range from jazz to gypsy folk.  "Dark Realms" finds things slowing down. This results in a heavier over all sound. Some effective sun vocals come in and seal the deal on this song. They covered a great deal on the opener which was under five minutes, so this ten minute epic is even more expansive, though holds a folky power metal feel.

"Negative Polarity" flirts with more mathematics so it doesn't flow as smoothly as the other songs leading up to it. "Three Six Nine" also falls into the spastic prog math trap and is not as hooky of a song as the other  They go into some blazing fast sections, so fans of faster more thrashing metal will like that. The album ends with the 11 minute "Solitary Striving". This one works better because it slows down and subtracts most of the math in order to let the song breathe, I did listen to this song several times to fully absorb what was going on. In fact that is something I had had to do with this entire albumas there is a lot going on. I like the mood to the last song much better than some of the more flashy displays of riffage in the two songs before this one. The sung female vocals float about the sparse instrumental backing. It's not until 5 minute in that the metallic side of what they do kicks in. When it does it's more death metal in it's intent. The vocals have moreo f a lower husk to their growl.
Without question these guys are stellar musicians. Songwriting sometimes takes a back seat for the more adventurous turns this album takes. It is a hard balance, one that plagues progressive metal. It behooves them to take note of the classic rock masters like Fran Zappa , Genesis and King Crimson in not only dazzling you with the wonders of their talents , but to write good songs that keep you coming back for more. These guys are capable of doing this, it just doesn't happen 100 percent of the time. It is however better than most so I will give this album a 9.