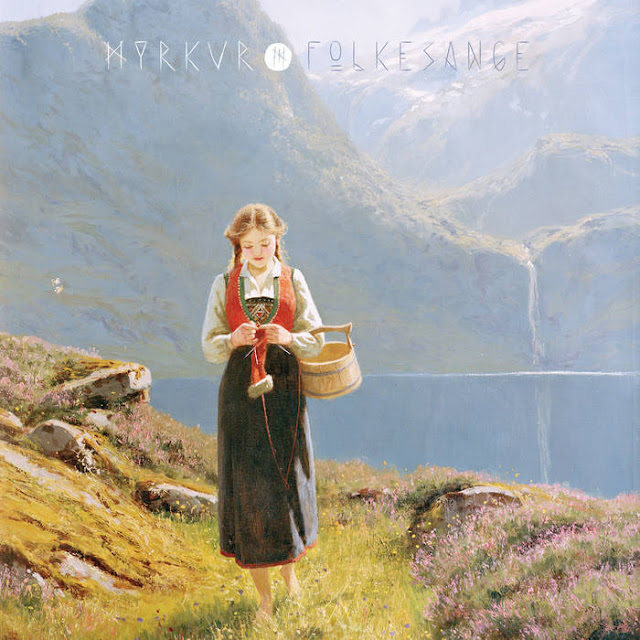 Here is an album where the cover is a spoiler for what is inside. The opening track is so beautifully sung it's hard to resent her for not making another metal album. The metal side of  what she did was weaker than her more melodic efforts to begin with. The second song has a little more frolicking to it and if you are in the mood to do a little jig then you will dig it, but I prefer the more somber tone of the opening track. Things stay on the more somber side for "Ramund". Somber might seem like it's being used a bit for this review, but it's more accurate than dark or melancholy. Their is a more misty morning feel to these songs, but never a foreboding or anything thing sinister lurking in the woods the songs are taking you into.

She goes up into her head register for "Tor I Helheim " This song is o.k , but the songs are all beginning to sound the same at this point in the album. If it continues in this direction  it will be begin to bore me. So I can take about 5 songs of this. You might get butt hurt or defensive about this and try to argue I just do not like this kind of music and to that I will say"I have never gotten bored listening to Dead Can Dance" . It looks like their is a new Burzum coming out so knowing the path he has gone down I can imagine it will be similar in mood, though not as a well sung. "Svea" doesn't get on my nerves as their is a more accented syncopation and stays in a minor key. Once again somber, not dark or melancholy.   The song after this however sounds like it's the same song just slightly modulated.

When the fiddle does begin to give the first hints of  melancholy her voice dances around it in a more upbeat manner . The more traditional strum of "House Carpenter" shows how bluegrass was derived from Northern European roots. It's upbeat ,but is still once of the album's best songs. In comparison "Relar' fades to into the distance to become background music. Where she proves she can compensate for the lack of sonic heft is with haunting melodies, some have more propensity to entrance than others.  The last song is some ambient piano tinkling and vocals that hover around it . This kind of folk can be sonically heavy without being metal, projects like Wardruna and Heilung both accomplish this, There three great songs, but other wise things re 'nice" . Pleasing sounds without much backbone to them. The minimal percussion factors into this . I will give this album an 8.5 . Better than the bulk of music pumped out these days , but as far as what we have heard from her in the past mediocre.It will have all the basic bitches who pretend to be witches dancing in the woods.