My Dying Bride : "the Ghost of Orion" 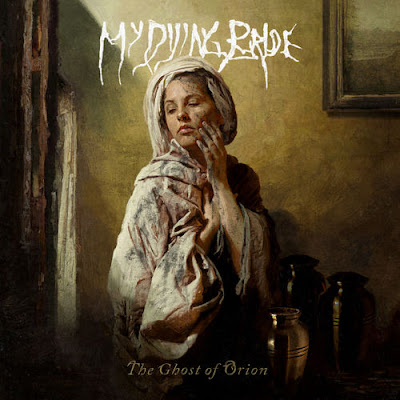 The opener lives up to their claim it will be more accessible this time around. A great deal lies in the production. The guitars are not as dark or dense. The main vocals is not as emotive or perhaps melodramatic in their plea. There are growled vocals that do surface later in the song. There is a more sorrowful current on "To Outlive the Gods" . It flows well , but feels more like folk metal than doom. The guitars have almost too much mid range and little bass to their tone. The drums are also a little on the think side. I am not hearing much boom in the kick. Perhaps if the bass was dialed up it might aid. Though it could also make these other issues stand out. Turning it up louder and wearing head phone does help a little.

"The Solace" meanders without drums to guide the song. Ghostly female vocals and wandering guitar.  Not the album's proudest moment by far. n a better direction on "the Long Black Land" . Better in that they get darker. The first half of this album is not that dark, which I can not reconcile with  this band. The violin is very prominent on this album . Normally that is what gives them a more melancholy edge. Instead the mood tends to feel like newer Katatonia. Lena Abe whos started playing bass for the band in 2008 is still onboard. The bass is mixed way back band the guitar so her contribution is almost negligible. The growled vocals return midway into this one. They alone can not make the song heavier. There have been plenty of album by these guys where they did not even plays large a role as they do here and the result was more powerful thanks to the heft to the guitar at the time. It helps when the drums come up in the mix as they do here. Another more recent addition still present is violinist Shaun Macgowan ,  whose playing is not a dark as his predecessor,

This album is the first from Jeff Singer who played for Paradise Lost. Perhaps this is why they were afraid to bring the drums up. Guitarist Neil Blanchett also makes his debut here. So we only have two of the original members who played on "Turn Loose the Swans" which is what their albums should be weighed against. The title track is just an interlude with guitar and whispering. Lots of clean guitar tones on this album. The vocals to "the Old Earth " are really well done. The guitar also finally has the weight we have needed this entire album. If you want classic My Dying bride this is the song they bring it on. "Your Woven Shore " is just a outro where a choir takes center stage. Is it pretty ? Yes. Is it something that should make up the totality of a My Dying Bride song? No. I will round this one down to an 8.5. It''s initially a disappointment, but hopefully it grows on me. They are still great musicians just not bringing it as dark or heavy as I want from them.