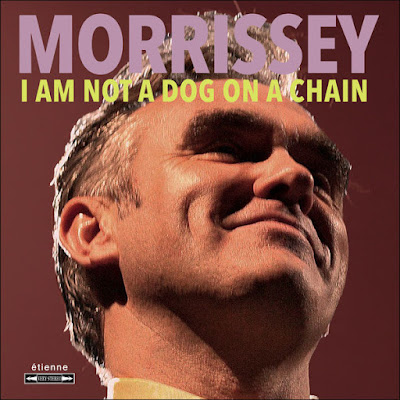 Morrissey came out of the past decade unscathed  by the  witch hunts, and showing no signs of having to censor himself from being himself here.  I was unsure about the electronic beat leading into the song but once the vocals come in then things fall in line with what you might expect from Morrissey. The chorus is very solid. Lyrically it is as biting with lines kill yourself, then for god's sake kill yourself" . The electronic elements stick around for "Love is On it's Way Out". Here he laments about the sad rich shooting down elephants & lions. This rings true with his values. The harp sounds are a little odd. Guitar is not playing much of a role on this one until the end of the song. His trade mark croons sounds good on the first two songs, so I am pretty confident this album is going to find him vocally in fine form. There is marginally more of an organic sound on "Bobby , Don't You Think They Know?" . This son is at first funky until it breaks down into a piano part. It's one of the more interesting arrangements I have heard him employ in some time.

The title track is alright , but not as impressive as the first three songs, though lyrically this song is great in it's message to doubt the media. There is a happier tone to "What Kind of of People Live in These Houses". Lyrically it is more skeptical .The chord progression moves almost like "Sweet Jane", but layered with a country guitar over it. There is a softer groove to " Knockabout World" to compliment his smoother vocal line,  The Spanish make it sound like off Broadway pop from the 70s . Moz's voice sounds good, but he is not really testing his range and keeping everything in a more casual mid range.  Lyrically he is pretty consistent. There is a more 80s like pulse to " Once I Saw the River Clean", this recalls the Smiths more than any other song on this album. I could hear Billy Idol singing over this track. Think "Eyes Without a Face".

"The Truth About Ruth" finds him singing with a more hushed tone. This might be the biggest dynamic shift in terms of the vocals on this album. Things get perhaps the weirdest I have ever heard Moz go on "the Secret of Music". It is barely held together as a song, but you have to respect him for going so far left field this late in the game. There is a lazy pace to " My Hurling Days are Over". The guitar is sparse with Moz's voice holding things together. The instrumentation slowly builds around him until kicking in half way into the song. I will give this album a 9.5 and see how it grows on me. As far as post "You are the Quarry" Albums go it's up there with "World Peace is None of Your Business".

Email ThisBlogThis!Share to TwitterShare to FacebookShare to Pinterest
Labels: "I am Not a Dog on a Chain", 9.5, album review, indie rock, morrissey, pop rock, The smiths