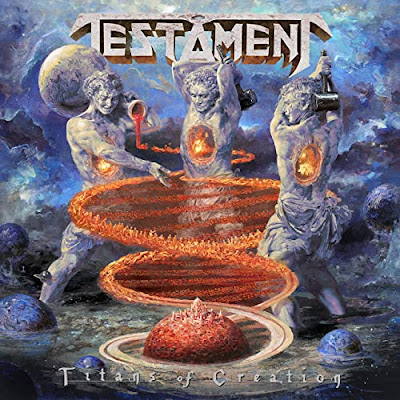 Testament were always one of  my favorite bands when it came to thrash from the 80s/90s . They cared about song writing. The vocals had purpose and personality. These things put them head and shoulders over bands on the tier beneath and pound for pound "the New Order" might have been the metal album of 1988. That year had some tough competition so at least in the top five. I lost track of them after "Demonic" . It became a weird time period for thrash. The first song on this album feels like they are picking up where the left off with "Low". The riffs are there and fohe second song "WWIII" is not as inspired . They fire back with more melody on "Dream Deceiver" . Is "Night of the Witch" as good as "Envy Life"? Um no, but it's pretty good and the meanest song so far while still giving you enough hooks.

By this point it is clear these are some of the best metal musicians assembled in one band perhaps today. Skolnick shines as he is known to do, not only shredding but making solos that make sense in relation to the song. Gene Hoglan is a beast of a a drummer still. Chuck Billy's voice sounds great considering he has not gotten any younger , yet every bit as potent as he was on "Practice What You Preach". He sings really well on " City of Angels " . This song also really showcases Steve Di Giorgio's playing. He has chops but is very melodic and nuanced. Producer Juan Urteaga really captured excellent tones all the way around. The gallop on with there more classic sound on "Ishtar's Gate". The vocals really pull this one together. The guitars sound great on "Symptoms" . A little on the more technical side than I typically think of this band being but the balance it with more hard rock elements.  "False Prophet" might have been the strongest song on one of their previous albums they have released in the past ten years, but here they have kind of raised the bar for themselves. ,

"Healers" has a lot of groove almost Judas Priest like. The vocals pretty much seal the deal. "Code of Hammurabi" did not grab me on the first listen . On second listen it's more of a guitar focused song , with Chuck Billy spitting out the lyrics in a more aggressive and straight forward manner. They thrash out more on "Curse of Osiris" . It comes together on the chorus. "Catacombs' is just a outro that seem kinda unnecessary. I will round this up to a 9. It Sits well with their body of work, but not quite at the level of the first 4 albums, it might grow on me. They are sounding fresher than most of their peers.  Comes out April 3rd on Nuclear Blast.