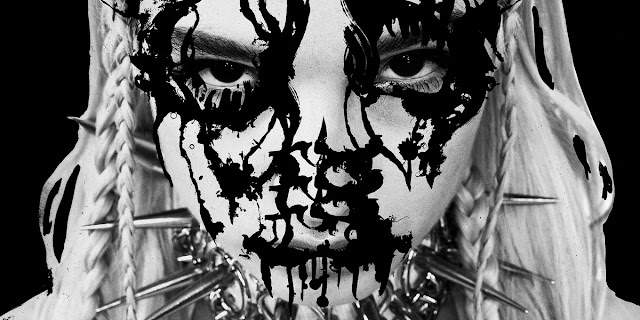 I am not sure people are ok with Ghost and Baby Metal , but have a problem with Poppy, the first song owes more to the Beach Boys than Meshuggah. The metal it does pull from seems to be the more tech djent like. Though the producer who is the real star real nailed the Queen guitar sound. Acts like Issues and In this Moment come to mind when it comes to the title track. This album also makrs her final working with Titanic Sinclair a inter net music personality. The two had a falling out. " Blood Money" has elements of dub step and hip hop mixed into the industrial strength nu metal . It is more abrasive than pop.  My 9 year old daughter says "It's like angel sometimes and sometimes it's the devil" .

She has more in common with St. Vincent than the kind of  pop that is on the radio. Sometimes she gets preoccupied with a sound more than the song. Other times she shine some song writing chops  like on  "Fill the Crown"  which also has a lower male vocal that sounds like Marilyn Manson.There are no other credits for it so it must be Sinclair.   The breezy ballad "Nothing I Need" finds her pretty much on cruise control.  Her more electronic elements are fine with me. I would not say they are dancey, and there are more interesting sounds than some of the rock ones she uses where the layering of guitar is weird. Vocally she seems to be more versatile than Billie Ellish, though her songs are not centered around the kind of hooks that gives Ellish her appeal.  She does employ a jarring almost Mr. Bungle like shift from styles .

Of the prettier more straight forward sounds she conjures I think I like what goes down on " Sick of the Sun" best. It has some shoe gaze qualities.The album closes with another more straight forward ballad that starts off not as solid as the previous song. It does eventual build up and works in a more rock dynamic.  I will give this album an 8.5, uneven from a song writing perspective , but I appreciate what she is doing here.