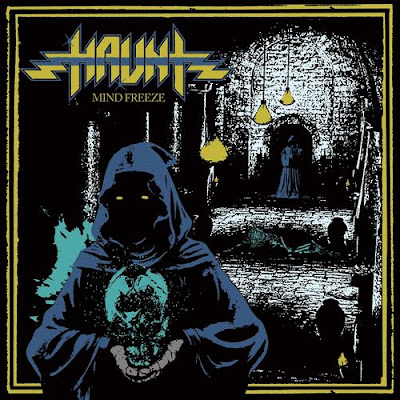 They continue to pick up where they leave off. Each time polishing their sound and sharpening their hooks. The chorus to the opener is pretty sharp. If you are not into the more retro side of metal then chances are this is not going to be for you. There is a more of a thrashing speed applied to " Hearts on Fire " . This doesn't do as much for me as the first song. The tempo rushes where there could have been more nuance added. Synths play a larger role in creating the retro metal sound. Things are slicker and more polished all the way around. It might take a edge off , but I would not call it selling out. It reminds me of solo Ozzy on the title track. The vocals are higher than what he did in Beastamker, though he never goes into the operatic yodel . Knowing his limitation this  keeps things simple to serve the song . The guitar solo are more honed and begin to elevate them into guitar hero status.

When they do get more aggressive it is due to stepping  on the gas and picking up the speed. On "Divide and Conqueror" this does not mean the sound gets more balls. The keyboards have a very synth wave sound. I do however appreciate the more melodic touches.  The synths come even more to the forefront on " Savior of Man". They must have really been into this season of Stranger Things. The hooks of the song however work well. It is kind of like when Uriah Heap tried to be radio rock in the 80s. They go back into the faster riffs with "Fight or Flight". I guess that is what happens when they use two verbs in their song titles.  The album's best song that ties together what this band is now about can best be heard on " Have No Fear" which is the best song on the album.

The opening riff to "On the Stage" reminds me of Rush. Perhaps the stage is lighted. It speeds up and I am beginning to see this is not the band's strong point and their song writing plays to their strengths more on the deliberate moments of the album. They get it together in this regard to some extent on "Voyager' to close out the album, but feels a little like the are holding steadfast to the color by number heavy metal tropes when there have been moments on this album when they took this sound and did something more original. Due to the less inspired faster songs I will round this down to an 8, which is still better than most doing this sort of thing. .