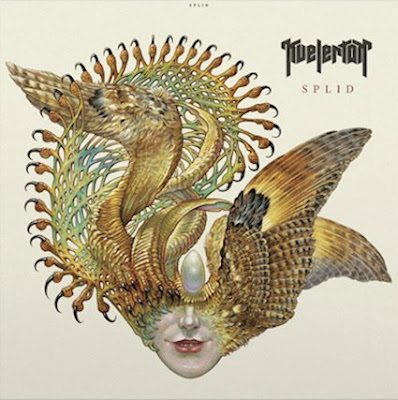 These guys are being featured for Black Metal History Month as they have a blackened history. This is even more distant history as things have gotten weird on the 3rd album from these  Norwegian punks. It is less metal this time around, so much so my first  thought was .. this sounds like the Refused. This is their first album with new vocalist Ivar Nickolaisen .  The guitar harmonies are really clean in the vein of  Thin Lizzy. None of these elements are out of left field they are just dialed in with less aggression. There is a more rock n roll sound to the strummed guitar on "Crack of Doom" . This song is s sung in English and features Troy Sanders . This song also high lights where Ivar's vocals are different than his predecessors. They seem higher and more of a punk sneer than the more hostile and throaty growl of the past.

By the third song "Necrosoft" I have reigned myself to the fact this is not necessarily the same band. This allows me to just listen on a song by song basis to how this effort stacks up. Sonically there is more going on but with less density and intensity.  "Discord" is a more punk paced rocker. "Bratebrann" does the rock n roll thing better with a sharper edge to the guitar tone. All of the guitars sound great on this album and are masterfully executed. The multi tracked chorus  reminds me of Styx more than Queen which is what I think they were going for. Midway into the song they have already covered a great deal of ground, so their song writing has stepped up dynamically. In this way they have a made a logical progression from the first album which threw itself at you in a drunken howl. This album feels like it's being played by people who are stoned , not drunk.

From this point they begin to lean in more of  brisk jangling garage rock flavored style of punk. More polished than raw or rough edged. Not the first punk band to be influenced by Thin Lizzy. We begin to get variation of this theme with the dials turned more to rock . Not to say it is devoid of all metal moments just not how metal has really be defined since the mid 80s. Thss  is still a fun album and while it might not be a firmly planted in the wheel house of  what today's metal head listens to there are enough moments of thrashing to tempt you into giving this album multiple spins. The more new wave side of the 80s haunted the guitar tone of " Tevling" . I love this , but I can hear where their more metal minded fans might not embrace this despite the more explosive chorus. There are without a doubt more atmospheric layers going on with this album, yet it has a party vibe to it. I am not disappointed. There are some post -punk moments like "Delirium Tremens" which drives the point hom that I am the right demographic for these changes.   hough even this song builds into some of the album's more metal moments. There are few touches of black metal on the last song, but it pretty much aligns with what you expect from this band . I will give this one a 9 and see how it sits with me . comes out on Rise Records Feb 14th .