All the Saints - "Look Like You Are Going Somewhere" 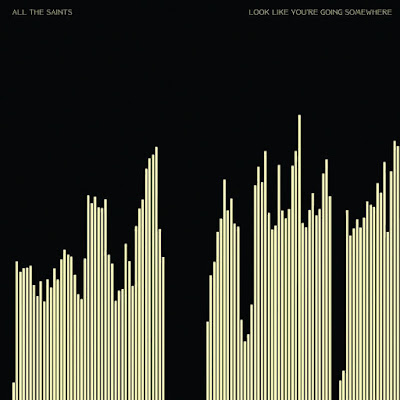 Still catching up with 2019 . This album came out in July , on Chunklet Industries, an Atlanta based label. Even if I was going to throw this on an end of the year list I am not sure which list it would go on. I suppose indie rock , as that is where Nothing would go and they are less grunge than Nothing and darker, but not metal . However I can hear traces of the Melvins in what they do. The Melvins kinda of flirt with sludge so there is that clanging lumber to their more punchy dynamic moments. The guitars have the nois rock dissonance with enough atmosphere to make fans of shoe gaze happy. So there is a great deal going on here. "Lites' hangs onto the lumber while picking up the pace a little. A little rougher around the edges as far as song writing goes than the smoother flow of the opener.

I like the tension to the title track. This along with the dreamy vocals that are a little more sung make this one of the album's more compelling songs,. The guitars are well layered and help the song progress.  I am ok with the song slinking around like this and do not expect the explosive pay off that would seem the obvious place for it to go to. "Casket" which is pretty much just piano and vocals feels more like an interlude than a song. The bass driven "Creak" reminds me a little of Queens of the Stoneage.  The song has more of a hypnotic drone than those guys use,  The vocals do show a little more range on this one. "Feeders" combines a few different elements in it's boozy haze. All of them some how work together and make the song it's own odd beast.

"Olde Order" kinda clangs around with more drive . This is another very syncopated in it's attack. For what these guys do this is more straight forward. In some ways the same could be said for the bass centric closing song "Closer , Owner". This does have the louder dynamic that they tease you with in other moments of tension. The guitar playing is cathartic. I will give this album a 9 and see how it sits with me. They are without a doubt great at what they are doing . It's not metal , but has some balls and moodiness at the same time.

Email ThisBlogThis!Share to TwitterShare to FacebookShare to Pinterest
Labels: 9, All the Saints - "Look Like You Are Going Somewhere"