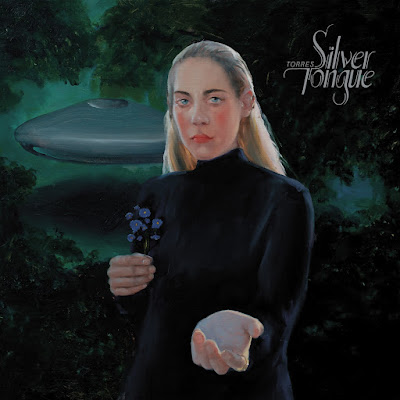 By the fourth album of this indie rock singer songwriter there can be no mistake she has her songwriting finely tuned. The odd angular and often obtuse nature of her songs is still in play. This quirk is part of her personality. The main difference I am hearing on this album in comparison to the first three, Is it is a little more ambient. The arrangements are even more minimalist. While it is an easy album to listen to, I had to give most of these songs repeat listens in order to latch onto what is going on here. The hooks to the melodies are very subtle. Lyrically the vague metaphors ponder her complicated love life. If Zola Jesus was a folk singer I think the results would be similar. There is a very ambiguous tone to these songs. This reflects the androgynous nature of her persona.

The chorus to the second song works more than the verses , but it breezes past with no dissonance. More instruments surface to create a more organic feel to " Dressing America". The line " I tend to sleep with my boots on" is really strong and this highlights the maturity her songwriting has found. She also uses her voice as more of an instrument this time around.At times her melodies feel like Irish folk songs. "Two of Everything " is more atmospheric than the previous songs relying on her vocals to keep it in motion until the weird electronic groove that bubbles up. Lyrically this is more melancholy and less hopeful than some of the previous songs. The guitar to " Good Grief" gives it more of a rock feel. This drive is the dynamic shift the album needed as if it had gone in the minimalist atmospheric direction is would have gotten stale.

"A Few Blue Flowers' finds her experimental style can fall short at times of really gripping as it needs to be, though just on the previous song she shows she has to potential to deliver as she has in the psst. There is a more delicate folk feel to "Gracious Day" .  She recaptures some of her magic with the title track that closes the album. It's moodier which gives it better energy than some of the other more detached sounds she has brought to the table this time around. I will give this one an 8.5, it's not her best work ,but it is still a really solid showing that will appeal to fans who already know what they want from her.