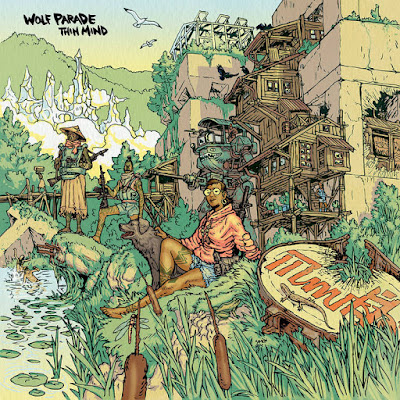 This album might be more interesting lyrically than it is musically. Lyrically it's a frank take at the tech ruled lives of the younger generation. This makes it more biting. Musically it's like if you mixed the Strokes with the Cars. It has the smoothed out 80s pop feel that balances out the garage rock jangle that I might not like as much otherwise. "Julia Take Your Man Home" finds the roles almost reversed as the melodies, grooves and hooks are great. The lyrics are quirk and humorous , but not as much of a bullseye as the previous song. Though the line 'to say he loves you, would be unfair to you" .  "Forest Green" find them just kinda falling back into whatever one else in their genre does.
The melodies are giving more room to use finesse on "Out of Control" . This also allows his voice the apce to open up and sing more.

"the Static Age" has what sounds like political undertones, it's done in a pretty tasteful way. The guitar helps guide  this one's pop sensibilities . This is rock for the Coachella kids for sure , but it is really well done.  "As Kind as You Can" continues down the political road, it proves there is a way to to it that works. The surreal music flowing under it begins to shift the comparison to Xiu Xiu jamming with Arcade Fire. There is a more jazzy groove to " Fall Into the Future" ironically at this point in the album I became distracted by looking for things on the internet. More electronic elements are in play here to create atmosphere.  "Wandering Son" is less interesting than the previous song and plays off what I have heard other band already do .

"Against the Day" has a hookier groove to it. "Town Square" is more straight ahead Talking Heads inspired rock n roll. Because at the end of the all the bands I referenced as influences are all influenced by the Talking Heads.  I will give this album a 9 as it is very pleasing to my ears and making it into my iPod as it has a message worth hearing .