And You Will Know Us By the Trail of Dead ;" the Godless Void and Other Stories" 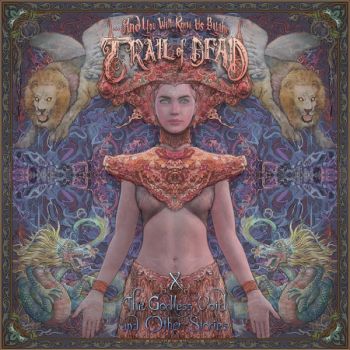 After a dramatic instrumental intro piece the band goes into the kind of adventurous indie rock they have been pumping out since the 90s. It might not be as sonically intense as their earlier work and almost Brit pop with the melodic sensibilities . There are dreamy qualities to how the melodies float in. Much like many of their peers from this era, the vocals are planitive and get the job done without a great flexing of their vocal chords. This slacker sound sometimes falls into a mumble but is still emotive. They are bringing a lot to the table as song writers and it recalls the days when songs felt something and went someone. "Into the Godless" has a little more and the vocal have a more snarled belt to them. Not metal or punk, yet carrying a punchy aggressiveness. Sacrificing some of the surreal melody that glazed the first two songs.

There is a lighter tone to " Don't Look Down" that carries a jangle owing more to early 80s R.E.M. The vocal keep my attention more than the previous song and it flows really well even if it is more accessible of a sound. It makes it clear that he can actually sing when he tries. "Gone" works off of a hushed tension that never really explodes the right way to pay off .  A more relaxed trum opens "Children of the Sky". It does build into a dynamic more consistent with what these guys do.  The more intense sonic return for "Who Haunts the Haunter". The guitar tales on a woozy shoe gaze like sound as the bass creates the droning groove. The vocals fall neatly into the cracks to provide the needed melodic touch.

"Gravity" shimmers with less ambition and could have been any radio friendly indie rock band from the mid 90s. Which is actually in the plus column for them . There is more atmosphere and groove to "Blade of Wind" , this finds them back at the Stone Roses like Brit place .  They are both melodic and hooky so this is fine with me as well. It ends with a psychedelic ditty that is in their sonic sweet spot. Overall another solid post- 90s album from them I will give it a 9.

Email ThisBlogThis!Share to TwitterShare to FacebookShare to Pinterest
Labels: And You Will Know Us By the Trail of Dead ;" the Godless Void and Other Stories"