Interview Groovie Mann of My Life With the Thrill Kill Kult. 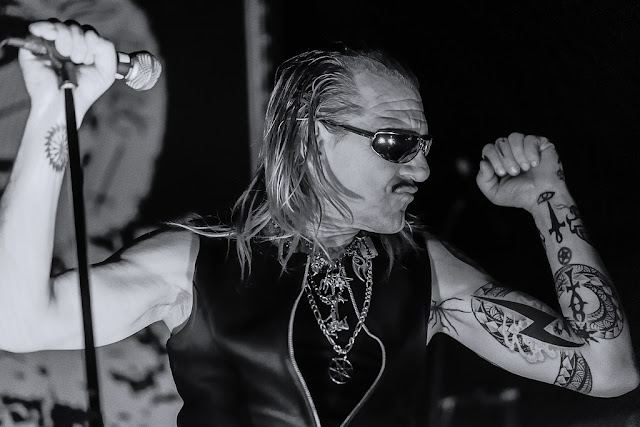 My Life Life With the Thrill Kill Kult are back and sounding better than ever , even taking the top spot on this year's goth/ industrial top 10. I caught up with Groovie Mann on their Atlanta stop of their current tour to hang out back stage and pick his brain on Thrill Kill's iconic past and vital present.

When  you first started out as a band what was your inspiration since at the time nothing was out that sounded like you guys ?

Each other, our bands at the time were in a different head space. 1981 we wanted to break out from the stand band format and experiment.   Buzz was messing with crazy looped samples and electric bass. It began with 4AD, this was music that had previously been dubbed alternative before that term was commercialized. Electronic punk, with a great deal of freedom and more like art. We were really into Loud Reed and Alice Cooper. Punk like Iggy where there were no gimmicks.That attitude is what made it all come together.

There is a very organic feel to the new album “House of Strange Affairs” what do you attribute that to waht was the process like in making it?

I can speak for myself. I gather books and ideas I have written down go over to Buzz’s and present them. I will sing and record some we use to build other things out of. Lot of freedom there. It is sort of like putting a puzzle together.  There is a concept. With what if Sexplosion did not exist. This would have been the third album . So there is more weirdness yet it is similar to the other stuff

Always seemed weird that you guys got lumped in with industrial bands  when I tend to think of that as the bastard sons of Killing Joke.

Like Test Dept. I never saw that we were more like the new experimental thing. Back in 79 bands there were bands like the Residents and Throbbing Gristle, , all new sounds , I was a dj spinning records records by Coil, Alien Sex Fiend, that was sort of pre Wax Tracks, which is what  industrial came out of you know. I kind of works as like A& R for them, but was more into experimental stuff liek the Legendary Pink Dots. Young Gods who were ahead of their time.

Did the Labels very pressure you in the 90s to conform to that more?

We did what we wanted

With the new album things have a more orgaqnic sound than electronic, what was the recording process like ?


Different soft I suppose that is more of Buzz’s thing. Low profile with technology , just what ever works for us. It is not something to be relied upon. Don’t be a lazy musician. It needs to reflect the soul. Now the market is flood with crap. I have never been into hip hop, it’s not my thing, though there is some good stuff out there that is more experimental, but alof pop and hip hop is too reliant on software.
Posted by Wilcifer at 9:41 PM

Email ThisBlogThis!Share to TwitterShare to FacebookShare to Pinterest
Labels: Groovie Mann, Interview, My Life With the Thrill Kill Kult.