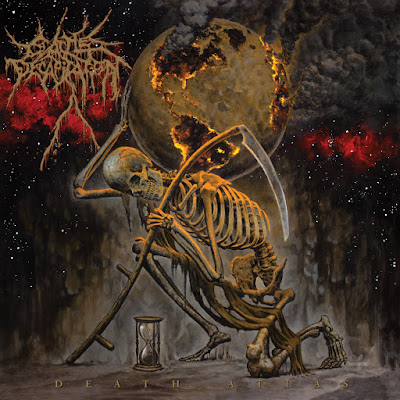 It starts like blackened death metal until the guitar backs off for the verse. Then it's more straight forward death metal. The chorus is the first part that sounds thrash thanks to the higher snarl of the sung vocals that remind me of Metal Church. When it is full death ahead , the songs begin to sound the same. There is a darker Dimmu like passage in the second that alerts me to the fact its a new song. "Vulturous" is more straight forward  metal leanings. They are like Dimmu in how they can just seamlessly shift from riff to riff. They are great at what they do. What they do involves ripping off Morbid Angel with the riff to " One Day Closer to the End of the World". They chorus to "Bring Back the Plague" is very Dimmu like, but i t sounds great so I do not care.

They do not stray far from what they have already established on this album by the time they get to "Absolute Destitute". There is nothing grind core about these guys except for the fact they play aggressive metallic music. The first minute they are full blast ahead. The few minutes of the song find it going in a darker direction. There is more of a thrash groove to "Finish Them". It makes me think of Mortal Combat. The sung part is a little awkward on this one. The riff is mean enough to do most of the song's heavy listening. One of the exceptions to the cool riffs alone does not a good song make."With All Disrespect" sounds like if Overkill was a death metal band. There are more melodic elements to "Time's Cruel Curtain" that give the album some breathing room. The bass player really shines on this one.

After a weird interlude the title track close the album. It is pretty aggressive yet dynamic. It is death metal with a melodic chorus. Not the common good cop bad cop feel. Ity is really well done and has enough groove to keep my attention. I will round this one up to a 9. It is really well done and hooks me in much easier than expected. If you are looking for some death metal wit ha progressive slant these guys might do it for you.