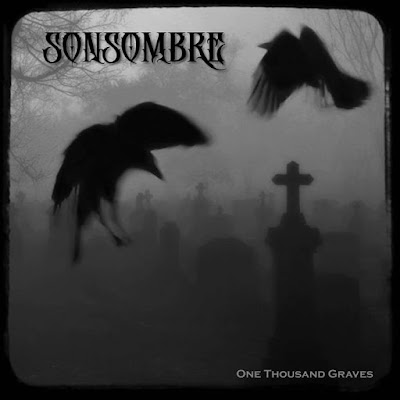 This will be the one Sisters of Mercy worshipping act I will review til Gothtober. I have a tenuous relationship with Eldritch and company since Sisters of Mercy is the second worst concert I have ever witnessed, the first being the last time I saw Marilyn Manson. The bass playing is the best thing about the first song. It plays off all the goth tropes. More dark wave than death rock, despite the fact real instruments rather than button pushing sounds to be the order of the day. Tedium begins to set in as early as the second song. I foresee this getting worse with each song that sets in if this is the level of original ideas that are being brought to the table. Funny enough this album is begin released by Cleopatra Records who first house the 90s second wave of goth.

"Like Rats" works better than "Until the Sun Goes". None of this sucks, but it does seem all too familiar. It's not all a total SIsters rip off as the intro to "Darker Skies" reminds me of "the Forest" before Lucretia starts being my reflection. The simplistic drum patterns begin to hold some of the songs back by the time we get to "Lights Out". Despite the stellar bass playing that would would better if it had more to lay the foundation with. The apce shifts to a slower more dismal mood on " Slumber" . It is back to the same old same old with "Highgate", this makes it feel like all the songs are beginning to sounds the same. The title track is a little more dancey.

I do like how "This Procession" sounds like " One Hundred Years" sped up. A good example of how you can take something and give it enough of a spin to make it your own. They do not do this one the last and fall into more lukewarm Sisters tributes. Where they win is capturing the tried and true sounds of goth. Since I love goth, I am going to find these sounds pleasing enough for redundancy not to bug me enouygh to detour me. This album has enough moments for me to give it an 8. I like the sources they are pulling from I just wish that I could hear more of who they actually are. I already own all the Sisters albums. Is being released on Cleopatra Records.