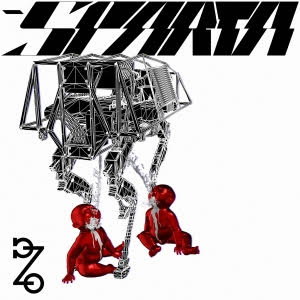 The bass player and drummer from Kayo Dot are onboard this time around. In the past this project has reminded me of a poor's man's Katatonia. There is a New York hipster buzz to the band as evident with pairing up with Kayo Dot main main Charlie Lookers travels in those circles, yet it sounds very European, like something that would have come out in the early 2000s. His vocal is more dead pan than Jonas. Huis pitch is not as dead on either , the notes come across as a little flat in places. All of that aside it still makes for interesting listening as they do deviate from the typical gloomy hard rock formula. There ia an angular quality to it and I would say it is more experimental than what I have heard from past releases. There is a weird ambiance to the title track. The oddness is subtle, not something I can readily point a finger at which says something,. The vocals work more for me on this one, though the song it self doesn't wow me as much as the opener.

Keyboards begin to have more of a presence on "the Last Faith"> The song is mainly driven by metal riffs. The lyrics are more interesting on "No Victim" . They sound like a metal version of Devo. When I go into this in more of that mindset, my expectations are more in line with reality. The guitar breaks down into a more muted tension on the verses. It also reminds me a little of Ghost on this one, which is odd because I hate Ghost, but like this song. This is a much more straight forward effort than the first few songs. There is a more minimal arrangement to "Return to Stone" .Kristin Hayter guests on this one and her vocals are more dominate. She does not annoy me like she does on her solo work. "Animal Outside" is another melodic hard rock song

There is an instrumental interlude then the album closes on a darker note with "  a Pill" . It makes me think back to the rest of the album which can be atmospheric in shades of gray, but is not a dark album. The vocals are improved , but can be a sticking point for my overall enjoyment. I will give this album an 8.5, so the songs them self compensate for the vocals, if y ou are a fan of this band then this should not phase you.

This album comes out February 24th .