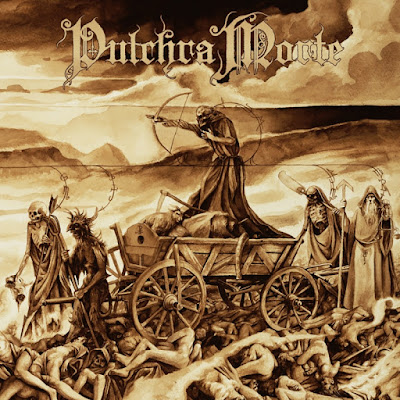 By the end of the year I will be sick of the death doom feel, despite it just being more of label for marketing purposes. These guys a pretty much just a death metal. Though not the kind of death metal that blasts you in the face. Comprised of former members of  the bands Withered , Harkonin, and Ex Mortis, they have a more technical winding to their riffs than anything doom. The vocals are a low death growl that is fairly articulated. Guitar melodies creep out over the steady flow of double bass. "Black Ritual" finds the guitars more melodic than this brand of death metal typically is and flowing out of a more classic metal gallop. It's on "Soul Stench" where the melodic qualities shift and broaden their range. I would not refer to them as melo-death, as they are all about the super harmonized Dark Tranquility thing that borders on Myspace metal. Female vocals chime in for a few bars, to get more of a My Dying Bride, feel though less melancholy and more uptempo.

There are a few interludes , but the album is generally focused and doesn't get carried away with atmosphere. The vocals seem very intentional and not just an after thought as does the addition of strings that seems to increase the deeper into the album you get . They continue to return to heavy, but not aggressive as most death. The focus is on the songs rather than beating you into submission. The focused approach to  song writing keeps the songs from only venturing over the minute mark a couple of times. More sung vocals surface , but are more buried in the mix on "Thrown to the Wolves". When they lean into the groove it creates more of an Entombed like feel.  "Reflection of a Dying Sun" seems to just play off of the same formula the rest of this album was spun from , just without the x-factor that kept those songs sounding fresh.

They use some doomy intervals in "Shadows From the Cross", but it's still just death metal. Being deliberate and being doom are two different things , mainly based upon the mood it invokes. Once I recognized the Entombed influence hiding under the surface then I can't stop hearing it. Not that they are a Entombed cover band, but if you don't like Entombed chances are you might not be into these guys. The main difference being they are a little more melodic than Entombed, and Entombed is more pissed off than these guys. Anger is typically the prime driving force behind death metal and these guys don't sound angry to me. "When Legends Die" proves that if you care about the songs enough you can get away without being angry. The songs are catchy enough for me to round this up to a 9 as it's an easy enough listen for me to just leave this album playing.