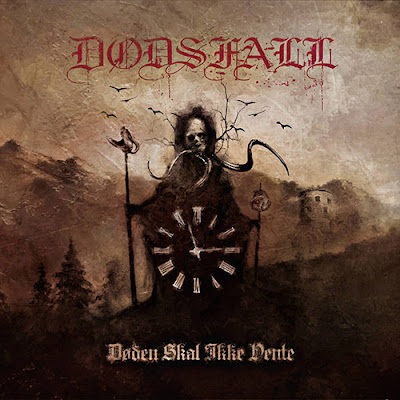 When it comes to being true Norwegian black metal the stab this duo takes on it on their 5th album has more of a thrash slant to it not unlike 1349. It's not until the clean guitar that comes in on "Svarta Drommar " or  "black dreams"   that we get to hear something that really sets them apart. Even then they are quick to revert to nasty blasty . Their is a color scheme as musically they stick close to the previous song on "Gra Himlar" which means "gray skies". Some of the riffs are catchy, but you know the rule around here is cool riffs alone do not a good song make. The vocal  are an almost croaked snarl. More high pitched than a death metal growl, but far from a scream. They slow down going into  " Kampsalmer" or "Battle Hymns" which is pretty stereotypical subject matter for this kind of black metal, and breaks from the color theme.

They are really mean and can lock on some chugs with authority.This is not lo-fi cvlt as fuck metal , but at has the production quality of early Slayer. The cymbals can get a little washed out , but the point comes across.  The drums are much better when they use double bass more than blast beats proving that songs can not live on blast beats alone. Low sung vocals chant behind the buzz saw guitar of "In the Eyes of Death" . Cleanly strummed is also thrown in offering the most dynamics from one song yet on this album. Things are pretty thrashy.  This more thrash like leaning works best when they slow things down to more of a classic metal tempo, but when the speed picks up there can be a more uniform attack.

Towards the end of the album the riffing does get more focused, but it also is single minded in it's attack and lacks the kind of atmosphere that brings the darkness in black metal. This gives them more of a Kreator feel than invoking what I think of as black metal. As far as metal goes this is still very well done , it just is not a black as it could be. Mood is everything when it comes to black metal. The instrumental the album ends with is just an acoustic outro. I'll give this album a 7.5, these guys are good at what they do and the album was easy to listen to though it began to take on a uniform sound as it progressed.