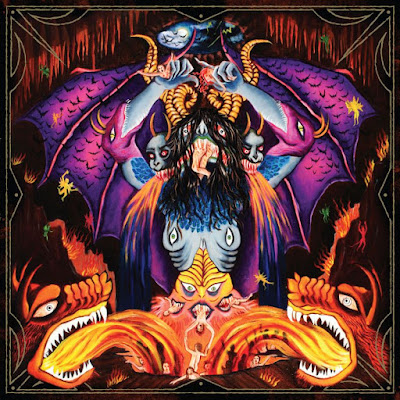 As much as I want to only focus on European band's for the rest of the month, this band is getting so much buzz for their Relapse Records debut that I am having to give them a pass. Half the band is from Cape of Bats. So the spookier guitar tone is still there. More refined than the earlier ep I heard from these guys. They are more punk than black meta;. Though very dark and aggressive on the opener. The vocals start off not screamed, but not crooned, so closer to death rock . "Black Flame Candle" is more metallic. There is a catchier thrash riff to "Devil is Your Master". The bass tone sometimes pops out , sometimes it's buried in the guitars. I think to have more of a death rock sound the bass would have to come up in the mix more. They are going for more of a first wave black metal feel meets their punk roots. Blackened Punk is the fitting sub-genre this should fit in though it does recall some of Darkthrone's black n roll moments.

"Skeleton Hand " is better than most dark punk, due to it's metallic side. The Venom like rasp of the vocals is the most metal thing about these guys and truth be told Venom always felt more like a punk band to me. Nuit" is oddly and instrumental that would have been better served with vocals. "Gaunt Immortality" does little to set itself apart from the pack songwriting wise. "Desperate Shadow" has more hook in the verse riff , which is important as the barked vocals are not helping in this regard. The same could be said for "Her Thirsty Whip". The vocals are a lower growl that falls back deeper into the mix. The last few songs begin to all sound the same. "Webs of Sorrow " does have a creepier break down but other than that it's punk rock with more of a gallop.

This album does have a few good song and is an improvement for them. I think their next album will be better as they will get to play with a wider range of bands touring with the support of Relapse Records. I will give this album a 7.5 , it shows potential and when it goes into it's more punk side it begins to become a blur for me , but I think they work best when bringing a darker touch to the classic first wave black metal sound.