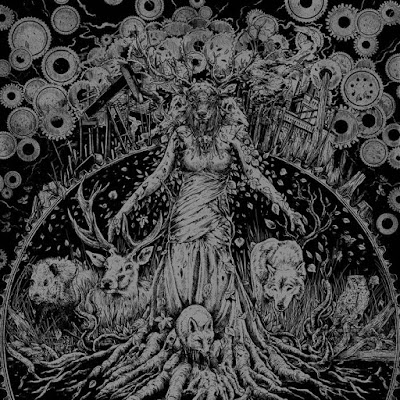 These guys used to be Thranekind. The focus has shifted as these straight vegan anarchists offer up a melodic does of blackened hardcore that is not afraid of atmosphere. This German band is not trying to be indie rock. They are not afraid of their metallic dynamics. They understand the importance of dynamics. The vocals have a a lower sludge like bellow. The blast beats are effective here because they are not over done and have something to contrast them with. They are not trying to be cvlt as fuck as this album is well recorded and some interesting guitar sounds have been captured. "the Great Depression" finds them beginning to lock onto more of a formula as it sounds like an extension of the previous song. To their credit the songs are all very compact and do not drift off into any sprawling drones

There is a great deal of melody to the guitars that drive "Revelation Time". The syncopated groove works well. "He Missed the stars" storms ahead with more of a black metal feel. The lyrics are kind of stupid and social justice warrior, I get that they are vegans and anarchists, but I think trying to have a some kind of message like that is Christian based and thus not black metal so it ruins the song for me. They slip into a more deliberately flowing pace for the next two songs that carries more melody. At this point I am trying to block out the lyrics. I think the rasp of the vocals begins to get a little repetitive, as it takes the same approach even when things are switched up like this. The melody of this song almost has more of an old school emo feel to it. By that I am talking more Hotwater Music and not My Chemical Romance if you are too young to know what that is. The vocals do come closer to singing as it builds.

The title track has a very similar feel to the previous song. The vocals don't roar in until the last minute of "Earthmother Rising". It has the same shimmering slow pace and gives a dramatic sonic build with a great deal of emotion, which would be more impressive if it did not seem like these guys were recycling riffs. I'll round this down to an 8. The album sounds good and I like where they are going sonically, I want more anarchy and less bleeding heart from them lyrically, but think I like these guys better when they were Thranekind.