Black Metal History Month- The Scars In Pneuma : "the Path of Seven Sorrows" 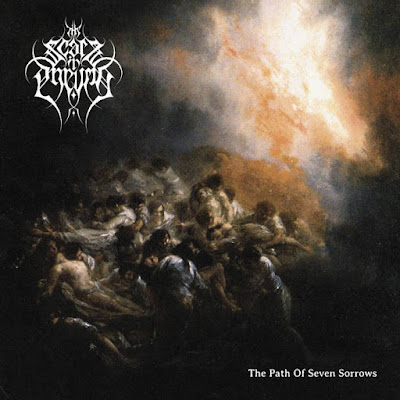 This band used to be Ogen.  Hailing from Italy the debut full length is not black metal in the most cvlt form of the term, instead like many bands these days sub-genres collide, but at it's hear black metal is what it all seems ti add up to. The low rasp of the vocals sound more death metal to my ears, but the guitars are clearly going for more of an epic black metal feel. Midway into the second song "Souls are Burning" they sell me on the catchy tension in the riffs, this is before the female vocal comes in. "Spark to Fire the Sun" just seems like run of the mill blackened metal and doesn't stand out or do much for me. The first song that really connects for me more than the others is " All the Secrets We Keep" because it has a darker and more melancholy feel to it. It is slower and more straight forward than the others as well.

They do not writing big sprawling songs and can even keep things down to three minutes when called for. There is clean guitar that opens "the Glorious Empire of Sand" that helps give the album a little more dynamic breadth. It builds kind of like a lot of the thrash from the late 80s. There is a great deal of tension to the point that it is going to be hard for it to have the pay off that will equal the build up. The last song is more of a post rock thing that seems to work off of the theme established in the previous song. The female vocalist who appeared briefly earlier in the album returns for an even briefer reprisal on this song that is largely instrumental. At under 4 minutes they are not really looking for many places to take it.

I like their overall sound. There were a couple of stagnant moments and only one song that blew by me with out me really being drawn into it in any way, but this is a pretty solid effort. It is not another band just trying to replicate Darkthrone and just live off of blast beats alone so that is worth something in my book. I'll round it down to an 8.