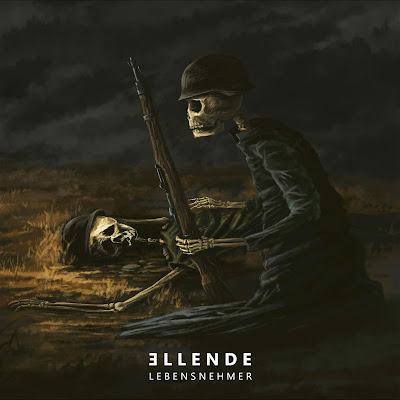 This project out of Austria started as a one man band and added session guys along the way , but is primarily still fueled by brain child L.G. who handles the vocals and core instrumentation as from perhaps drums. It starts off pretty straight ahead black metal then drifts into some pretty cool melody and atmosphere midway into the first song. "Die Wege" is more straight forward and driving, with hints of rock n roll. The riff are not a blinding blur of sonics but deliberate. Then things begin to get a little more diverse with the strum of clean guitar. It turns out to be an instrumental. It sounds good, but after the first couple songs I wanted to hear those more melodic elements worked into the bigger picture of what they do , which to some extent occurs in "Der Blick wird leer" .  The verse slows down enough to give the snarl of the vocals more purpose. I think the fact they continue to not rely on blast beats really helps this album.

It seems to be a thing with black metal this year, to get mid way into the album and the songs begin to sound the same. There is some redemption here as the guitar playing is pretty melodic and offers breathing room while keeping the shadows of the sound dense. This is shame as the more atmospheric sections are set apart like instrumentals when they re more interludes. Once again I would rather hear stuff like this worked into their songs to create more dynamic range. They continue to sonically intense melodic qualities even in the songs that are more straight forward black metal. Eventually they do come closer to blending the softer touches, leading to more furious blasting. But when it is done like that it comes across much more effective. I guess my question about integration of their two sides is answered on "Atemzug" which blends piano and acoustic guitar into what is otherwise their normal black metal sound. It seems to bookend it rather than weave into the more angry roar. The second part of the more melodic portion wisely comes by way of using the guitar solo to bridge the two worlds. But they are two very separate sides no blended. I will round this one up to a 9. I liked it so much it did make it to iTunes , if it makes it to the iPod is another story. If you want something in the vein of Agalloch, but without the more folk sides of that band then these guys are in the same zip code when it comes to the brand of black metal they can churn out.