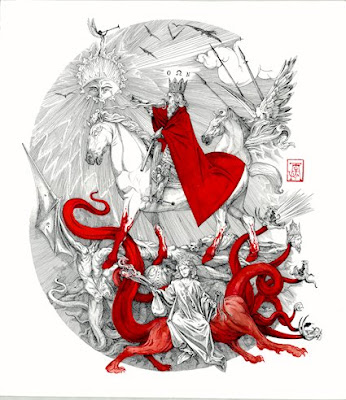 Calling something ritualistic in metal means one of two things, it's going to be shitty black metal with terrible production or it's going to be theatrical in the atmosphere used. This Swedish band falls into the second category. The blast beats are sparse . By the time we get to the second song "Chant of Galgotha" it's almost more death metal. This middle ground is good by me as it reminds me of the time I first began hearing black metal tossed around and it did not have anything to do with blast beats and more to do with bands that were serious about Satan. The left hand path is clearly marked with what this band does. They seem to be more into the occult than just blasphemy to be shocking which I can appreciate. I think it's also the second song that I realize these guys are not trying to jump on the Watain band wagon. The first song had me on the fence about this.

One thing these guys do have in common with modern black metal is they write some long fucking songs. The first Epitome finds the atmosphere being used in a creepy horror movie manner. I am not sure what ritual this fits into, but it sounds good. Though is highly dramatic in the first few minutes, before the more metallic charge ensues. The meat of this song is some what melodic  but doesn't break any new ground. The more "ritualistic" elements begin to break the song up in awkward ways. "Sanguinem' kinda flows out of the previous song. It benefits from some really tasteful guitar melodies. The  second Epitome is slower and more deliberate. It doesn't grab me as much as the first.

There is a bigger more Behemoth like riff to " Relics of the Elohim" . The vocals feel more intentional. It is pretty well written though the atmosphere drops the bottom out of the song at one point. "777" is another solid song that is very focused on it's dark and malicious intentions. You can actually make out the lyrics on this one. The title track closes the album and a 15 minute song is going to be a real hard sell with me. Nothing really happens for the first two minutes. The tense riff it kicks into is cool. There are even more melodic touches than we have heard earlier in the album,  Then things speed back up. Sjx minute in and I am wondering how are they going to keep this song going for another 9 minutes. In another 3 minutes they are dropping back to atmosphere before firing back angrier The blastier barrages drift in , They were saving the songs coolest riff for final few minutes. I will give this one a nine and see how it grows on me.