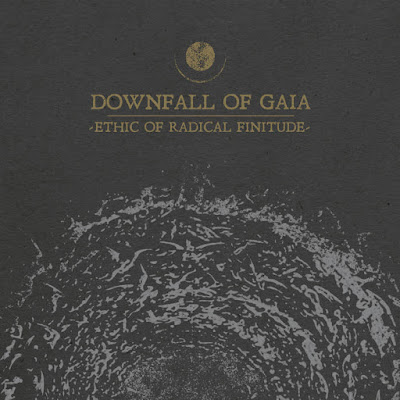 I am done with American Black metal for the month , unless I check out the Vimur album, aand prefer my black metal to be from Northern Europe . I think it is fair to call this German band atmospheric black metal. It's more of a gray metal.They do pack in th blast beats but that is not the bread and butter they live off of. This band is good at what they do which is not centered around droning you into submission. When they do really rip out something metallic on the 3rd song it lashes out with convincing anger. The atmospheric sections they wander off into provide a dynamic shift. "We Pursue the Serpent of Truth" does go into the sonic blasting but sets it up with more breathing room. The drummer is pretty stellar and plays fills around the tremolo picking. Then a low spoken vocal breaks up the screaming, before they head into Deafheaven's zip code by dropping into half time. The snare sets up more of a march as they float into their more post rock side. The more predictable blast beats falls into a slower section with a gang vocal chant.

"Guided Through a Starless Night" pretty much goes right where you would expect this style of black metal to go with a sweeping swathe of rage. This only surprise is when the song shifts into a minimal guitar line against a wall of ambiance with a girl doing spoken word over it. "As Our Bones Break to the Dance" is well done but straight forward with the guitar solo the only thing that reaches out from the blur to grab my attention before the attack of a tense chug. For the sub-genre of black metal they deal in these guys are somewhat compact in their song writing not going past the 9 minute mark.

The last song opens with more of a post rock thing, then they thrown them into the more explosive black metal section, before slowing down for a sung male vocal to join in. It sounds like it could have come from a pagan metal album, but these guys are German. Then a spoken woman"s voice seems to be sampled as if reciting poetry . I'' give this album an 8.5 it's really well done and while I have enjoyed the listen I have given it, I am not sure I will listen to above and beyond those as I already have plenty of albums that fills this need. If you like the post-black metal that is not as shoe glazed then these guys are worth your time. No Agalloch, but more thoughtful than the bands jumping on Deafheaven's band wagon.