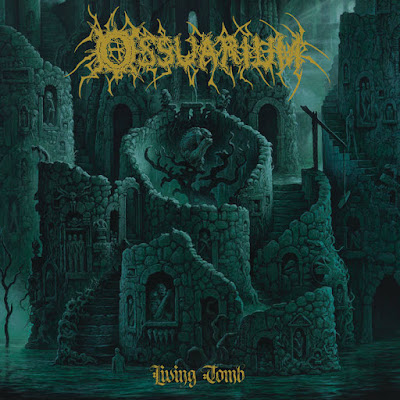 This band from Portland tips the scale much more on the death metal side of things it is blackened enough to belong here. The vocals are low growl and the double bass tramples your ears. All things that would add to up death metal. Some of the blasty sections are more black metal and the way they dip into melody and atmosphere invokes more of a black metal darkness. So I would not write them off as yet another death doom band. While they are effective at death metal it's the journey into the weirdness that is "Vomiting Black Death" that I find more interesting. This album sounds great and it's the clean guitar tones on this song that really sell me on that fact. The dynamic contrast makes the double bass that follows more powerful. They also have knack of conjuring riffs that are hard not to head bang to. They make the parts where they speed up seem like a cop out as you have just heard them do something far more cooler.

Where black metal is more about the sonic darkness , the death metal heart of this band is about hooking you in with mean riff. Of course it's going to be the sections of the songs that drip with creepy that are going to resonate most with me. There is a much more straight forward stomp to "Writhing in Emptiness". They go for a more ominous tone on "End of Life Dreams and Visions" before racing off into something much closer to black metal. The final moments of this song relax back into the shadows with the more melodic guitar parts that have cropped up early. Then it's back to a more almost Bolt Thrower like strain of death metal, before it sounds like depression grounds it. It's an effective tool for them to drop down to just the rumble of the bass.

"Malicious Equivalence " kicks off with them storming the gates with renewed aggression. It slows into something more along the lines of death doom. This drummer is a fucking monster , which can be heard more in the sections where they guitar drops back. They last song picks up where they previous one left off though going into a darker and more melodic place.  I'll round this one up to a 9 since the production, playing and song writing are all dialed in. I would have liked to have heard them experimenting a little more , but it is what it is. While I can't call this black metal it's death metal for people who like black metal.This was just released on 20 Buck Spin.