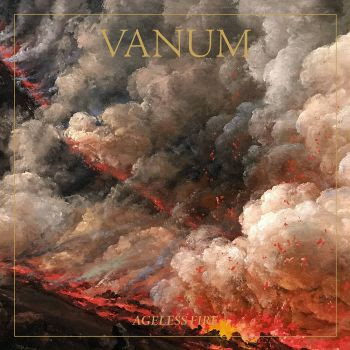 This year the American Black Metal bands I have reviewed have been pretty decent, I was beginning to get sick of American Black Metal and yearn for something with a little more Northern European blood in it's veins until I saw these guys are members of Yellow Eyes, Fell Voices and Ash Borer. So the cream of the American Black Metal crop. The first song has more of a epic almost Summoning like gallop to it that sets it apart from the work of their other projects. Though an instrumental, it's well done , but leaves me waiting for the actual song to kick in. More in your face , foot on the monitors metal when the real song does kick in the vocals are the glaring weak spot in the over all sound as they are a dry mid range rasp that feels like more of an obligatory after thought. So it's a good thing for these guys that everything else is really dialed in to make you almost able to over look this fact. I suppose those of you who only hear guitar guitars and don't care about vocals at all will over look this altogether and not get why I am even making it a deal.

I can almost understand why you would allow the vocal short comings to pass you by as the riffs are big and command head banging. If head banging is all you ask from metal then this album is certainly for you as it is well done. They guitars are well mixed and sound great. I am not sure why people call these guys atmospheric black metal as it's pretty in your face with devil horns held high. Nothing about it comes close to Deafheaven. The blast beats might drive it but the guitar parts can be intricate. When it does come to atmosphere , some surfaces on the otherwise blast heavy " Eternity" it comes by way of odd guitar melodies. Things get a little darker on "Under the Banner of Death" , but for a black metal album there is a bright feeling in what is going on here. The vocal are accented a little different though tonally in the same place. The verses carry more stomp to them. At this point in the album at any time they can break away from the blast beats it's more impressive.

The title track employs more melody to break things up more.This includes a cleaner guitar tone, though only for the first minute, then gallops along. I am waiting to see how long they can last without defaulting to blast beat as I think their most creative writing comes without them. The answer i only two and a half minutes. When they vocals come in things go back to blast. It finds them once again leaning heavily in the more speedy direction. Overall this album is not the most original thing and I prefer the darker Fell Voices , but it sounds good and they are good at what they do. I'll give it an 8, not something I really see my self returning more than I have to review this.