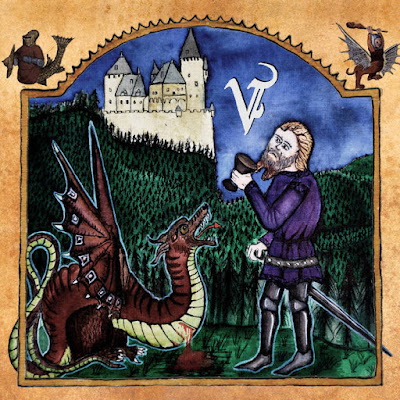 This is rather upbeat black metal. I am not sure that they are as medieval as they think they are, but I typically go to the Renn Faire every year so My expectations are high when it comes to the dark ages. The vocals are an interesting mix. Lower growls, gang singing and crazed howls all surface in the first song alone. The folk elements do not show up until two minutes into the second song. The blast beats are blinding fast and they guitars insist on trying to keep up with them. What worked well on the first song is compromised here due to the insufferable need for speed. They are playing the right notes , I am just not really feeling much in terms of emotion from it. Many prog bands also have this problem. Half way into the second song it seems like it should be over already which is not the best sign. I can tell these guys are French as  they have the kind of crazed attitude I pick up from many french black metal bands .

The 3rd song is more or less a folk interlude so the metal does not kick into high gear til the 4th song. It is pretty standard black metal. It's not until the song slows down that the guitar melody is allowed to shine. The guitar solo over the strummed part is pretty impressive. The guitar playing is this albums strongest point. From a song writing perspective, there is nothing that really wows me, but they are good at what they do. When you are three minutes into a 9 minute song and you are wondering when it's going to really go some where it always makes me feel like I am in trouble. It's the repetition of it that rubs my ears wrong. The blast beats begin to sound obligatory. I am not the biggest fan of when something like the folk interludes here are worked into the songs that best represent the band's sound. It would certainly make it more interesting than the run of the mill tremolo picking that is racing around here.  It's not to say the odd flute solo doesn't crop up in the middle of a song, it just is not a fluid part of a whole sound.

The last song starts off  with more frolic to it than the others bringing to mind the more pirate like drinking song of the frilly shirt bands. This is corrected by a more overt black metal blasting. While this band is good at what they do it is a little too upbeat for my personal tastes. I will give this one an 8, based of the fact they are so capable at what they are playing and if you like folk metal as much as you like black metal and not looking for something dark then this album is for you.