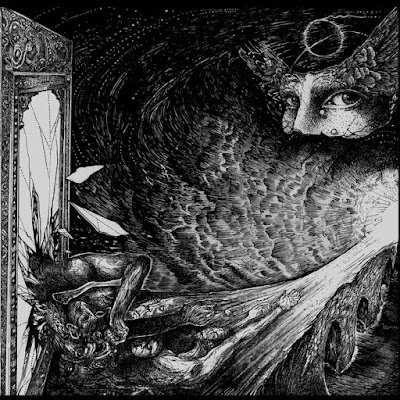 Here is some Weakling worship out of North Carolina. Not the hot bed for black metal, but Weakling is a thing of the past and while Deafheaven picked up where they left off , those guys are not even black metal any more so I am open to hearing what these guys have got going on. I can see where the problem is going to be because I look up at the screen and see I am on the second song already which lets me know their songs might all sound the same. The guitar could stand to have gotten a little better mix which might have cleared some of this up as the thunder storm drums are not going for groove or gallop of any kind. The guitar solo going into "These Once Tranquil Grounds" does help differentiate it a little and the vocals go into a lower more metal core like growl in places.  They do punch out a few more accents that give it a little hook, but not a dynamic shift.

There is a little more atmosphere which was needed to keep me from getting bored. It's in the shoe gazing / post rock realm, but it doesn't make these guys black gaze by any means. The drumming is more deliberate and the guitar more melodic like they gave this one more thought . This is less of a barrage and more of a well refined song, though it's not the most original thing I have heard all day. Yes it's heavy, but just because this is black metal history month that does't mean heavy alone is going to be good enough. "Witness to the Abyss" is more like watching riffs being thrown together with anger as the glue to make them stick.

The fact "Buried in Regret" is more straight forward and mid paced is a positive for their sound as the racing speeds sometimes feel like a car that is going out of control. The vocals are back to the lower more death metal growls on this one. At times they carry more of a howl. The guitar has the potential to be sonic, but the speed thing is the sticking point and the fact the bass is lost in the mix , keeps it from have a more dense organic sound. While some of the songs do sound the same the over all sound is good and I'll give this an 8 for the people who might not hold this under such a harsh magnifying glass and they get points for knowing Weakling.