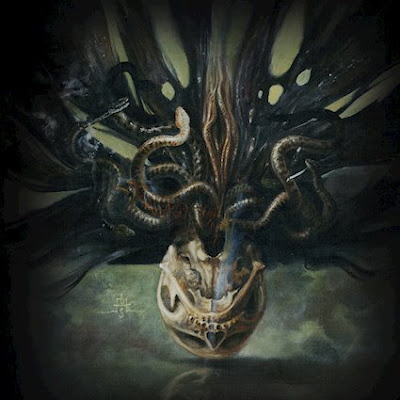 To break away from the Northern European black metal streak we were on I'll default to one of the only other countries I trust when in comes to black metal ...Greece. 15 days in and I was getting tired of the traditional takes on black metal so I thought I would give these guys a shot. It was the weird interlude in the first song when the sung vocals came in that sold me. They do rage with a raw fury. They do throw themselves into a hail of blast beats. They also are capable of playing at varied tempos. They carry a cavernous darkness to their sound. All things I enjoy in black metal. Their is something sinister and unhinged about them. Half the band has a black metal history in the band Astral Aeon. "Manifest" has some mean riffs that hook you in to further head banging before the blast beats come.

"Desmotr" starts off with a more doom like tone to it before it takes you on a compelling journey with dynamic swells. The sonic darkness these guys create impresses me. I have a feeling this might be one of the years most overlooked albums. "Virtue" keeps things a similar creepy pace almost like one of Slayer's serial killer love songs. Midway into the song they throw themselves back into crazed blast beats. But it is only for a few measures and they are back to the evil pulse. Then things begin to get weird. They lay on the ambiance thick. There is a soundscape of sonic chaos by the time we get to "Oracle". It's less song focused and abrasive atmospheric noise. To them point that it's more of a interlude than an actual song. This carries over into "Skeptom" which blends the ambiance with their more metallic sound more fluidly. It's that weird place where it sounds like the cross roads where occult death metal meets black metal. The vocals more of a black metal scowl and it does cross over into the expected blast beats . At about seven and a half minutes they lock into a riff so cool I wish that they would have extended it rather than just giving a sneak. There is also a quick melodic break down of sorts that is more ritualistic in nature.

The element of ritual carries over into the closing song, which is not really a song at all but a outro that drones on with trance like darkness. I'll give this album a 9. The murky storm they sail you through is very effective mood wise. Not the most easy to listen to, in the sense that this is not an album I would have on my iPod and listen to riding the train. It is a very dark piece of diverse black metal. It doesn't try to throw all the hip metal sub genres at you and things happen very organically. This album is worth your time. It is released on Osmose Productions March 29th.